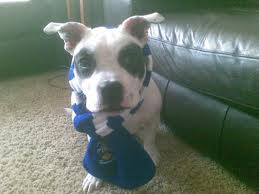 Last summer you would have had money on today's game being a six-pointer. Two of the losing play off sides both determined to go one step further next time around. It obviously hasn't worked out that way. Both Swindon and ourselves are a shadow of our former selves. Huddersfield, however, have firmly got their eyes set on the Championship. With something like twenty games without defeat, i was expecting an onslaught! And with Brighton already promoted, this side are pushing Southampton all the way for that second automatic spot.
The Huddersfield we got today looked more like a side in our position, not a side in the top three. Their fans certainly seemed more committed to promotion than the players. The Rose of Denmark was full of blue and white and full of good cheer. Not to mention a huge blue Union Jack draped across the front of the pub.
No, Huddersfield looked very ordinary and definitely there for the taking.
With the skipper suspended, we had Forch and Doc at the heart of the defence. I don't mind admitting, i was a little worried. Although they both looked clumsy, the visiting strikers didn't seem to take advantage.
The first half was very short on chances at either end and neither keeper was really tested. I think everybody in the ground would agree that Charlton edged it.
Michael Stewart had a great chance at the beginning of the second period but didn't connect well. Otherwise i think he looked like a fantastic option for us. An attacking edge to the middle of our midfield. I did get to see a little of him at Hearts and always liked what i saw. I think of him as a player who wears his heart on his sleeve and if we can get him to sign he could become very passionate about our club.
Again we looked the better of the two sides. I thought that after waiting forever for a goalless draw, we were going to get two come along together. How wrong i was.
A free kick to the visitors in dangerous territory was fired directly at our wall.  Substitute Kyel Reid put his hands up to protect himself and the ball struck them. It was a hand ball no question, so the wall was moved back ten yards to a position of extreme danger. Joey Gudjonsson fired home and that was that. We deserved a point, and got nothing. Not for the first time.
Once again we left the ground feeling like we had been robbed. But a spirited performance and a great effort from Scunthorpe at Selhurst eased the pain.
I must mention the gentlemen sitting a couple of rows in front of us. I think possibly they spent the first half in the pub. Fair enough i suppose considering how much we have to play for. Second half they amused themselves through forty five minutes singing incoherent songs. One young lad could hardly keep his eyes open whilst a much older acquaintance was up and down like a yo-yo. I've got to say, drunks can be a little embarrassing at best. When they're old enough to be your dad, it really was something to make you cringe. What made it a little bizarre was the fact he was sitting in front of a bee gee. Obviously not the volatile one.
I once again watched the match with Dean (whereslordlucan), and had the pleasure of a pre match pint with Marco (Marcocasual). Thanks guys for adding to my match day experience.
Posted by algordon_cafc at 9:38 PM