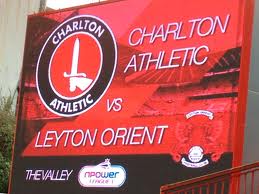 We may now be a Championship football club, but we start the 2012/13 season against familiar opposition in both location and recent encounters.

The Football League Cup is now rebranded as the Capital One Cup. Not as catchy as Carling, Coca-Cola or the fantastic Milk Cup, but on par with Worthington and Rumbelows in the roll off the tongue stakes.

The draw for the first round was made this morning and gave Charlton a home tie against League One's Leyton Orient. This game is scheduled for the 14th August, the Tuesday before the league programme gets under way. However, there is a chance it may get moved because of policing requirements due to the Olympics.
This of course is the reason there are no home friendlies and the anticipated game against Fulham at Craven Cottage will be behind closed doors.

Charlton do of course have confirmed matches at Welling, Bromley, Bury Town, Crawley and Gillingham before a competitive ball is kicked with, i suspect, one or two more to be announced.

You cannot of failed to notice that this summer we have been treated to a close season tournament on the TV, which it has to be said, has been both entertaining and of good quality. Euro 2012 may make a good filler for those of us who prefer our football live rather than through a television camera, but even the likes of Spain playing Italy, Germany playing Holland or even England playing anybody aren't as mouthwatering as a London cup tie derby. For the benefit of those of you who use twitter I'll add a hashtag, #rosetintedspecs.

In all seriousness though, a home tie against the Orient is a perfect little outing before the Championship campaign kicks off. The fixture list is revealed on Monday and the first game will be contested on the 18th August.

Chris Powell has been silent in the transfer market as of yet, a complete turn around on this time last year. There is talk of a deal with West Ham which would take the Addicks player of the year, Chris Solly, north of the water. Twitter is, as always, awash with rumours as to who may move to SE7. Free agent Keith Andrews is the most popular name banded about although at the moment I'm guessing his mind is on international matters and the small prospect of a match tonight against the world champions.

Whoever comes and goes, and i know a departure for Solly would bring tears to the eyes of many fans, we have to trust the continued judgement of Chris Powell.
There is no doubt last season he worked wonders and there is no reason to believe he'll do anything but the same this time around.
We cannot forget that even with the success of last year we are still in the middle of the rebuilding process and need to be patient if we want the foundations of this club to be solid again.
The new owners have come in and done a wonderful job of steadying the ship, but unlike many more high profile takeovers we do not have what appear to be endless funds.

Lets just take one step at a time, worry about who's in and out of the door when it happens and enjoy some cup football.

Posted by algordon_cafc at 4:15 PM