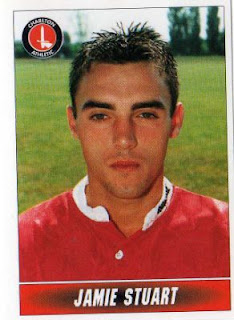 As i celebrated my twenty first birthday in a manner which i've now long since forgotten, although i assume in a South London public house, a baby boy was born many miles away in Kumasi, Ghana. This lad would go on to live the dream we all had as children, to play professional football.

By my twenty first birthday i'd long since ruined any chance i had of fulfilling this dream with the help of a concoction of alcohol, nicotine and motorbikes. The complete lack of talent and five years of being forced to play rugby at grammar school also partly contributed, hindering any ambitions of an appearance on The Big Match.

Emmanuel Frimpong is the latest in a long line of young footballers to pull on a red Charlton shirt and 'live my dream'. The young midfielder was snapped up in the week on loan until the end of the calendar year from Arsenal. Graduating alongside a certain Jack Wilshere, Frimpong has represented England at youth levels, already made his bow in the Premier League for Arsene Wenger and suffered injury heartache whilst on loan at Wolves.

A young player with a big personality, Emmanuel Frimpong is likely to make some loud noises in the dressing room too, i'm certain a little 'gangsta rap' will go down a storm with the more youthful elements of our squad.

All young footballers are now taught to manage their finances responsibly, Frimpong seems to have an astute business brain already at his tender age. Alongside his rapper cousin Lethal Bizzle (one presumes a stage name), the midfielder has started the clothing brand 'Dench', the word originating from a modern teenage variant of slang. Cool became sick which became dench and one day might just become groovy again, let's hope not but you get the gist.

A pacy midfielder likened to former Arsenal prodigy Alex Song, it's certain that with continued hard work and dedication this young lad has a bright future in the game. Learning from your mistakes is important, learning from the mistakes of others is key.

I missed Charlton's trip to Burnley last Saturday completely. Another victory on the road after success at Ashton Gate, not to mention the third win in a row makes for a much more palatable league table. With two home games now in the space of  four days, starting with the visit of Huddersfield on Saturday, we have the perfect opportunity to continue this winning streak and put a really good run together. Danny Hollands has gone to Swindon on loan and we've hardly batted an eyelid, that's how different the club is in just a month.

Whilst the hardy few made the trip to Turf Moor, i made a far shorter journey to Gander Green Lane, home of the chocolate and amber Sutton United. Regular readers will know of my soft spot for the U's, having lived on their door step for the best bit of twenty years. This was a long overdue visit, my first of the season and the first since a Conference South play off defeat at the hands of Welling United last May.

Little has really changed down the Lane since then other than the form. In their first season back at this level the play offs were a staggering achievement, far more than they could have hoped for, yet this second season is proving a much sterner test. Second season syndrome hits at every level it would seem.

An always very welcoming club house meant the opportunity to catch up with old friends and make new ones whilst enjoying a pint or two of Tribute, a beer they always excel in keeping, putting many a good old fashioned boozer to shame in the process. I was keen to throw into conversation whilst enjoying this liquid refreshment the small matter of summer signing and club captain Jamie Stuart.

Stuart was of course a Charlton marvel who came through the youth ranks and made his first team debut, ironically enough, against Huddersfield Town. Rather than follow the path of many youngsters towing the line and aspiring to be the best, Stuart followed my lead and blew it. Not in quite the same way, he didn't go the whole Hells Angel route, just the cocaine and cannabis although his temperament would certainly have fitted in with the biker fraternity i knew.

Infamously sacked by Charlton he still had enough ability to grind out a professional career playing lower league football but the question always remains, how well could he have done?

Sutton fans on the whole are a little underwhelmed by his arrival from the not so popular (down the Lane at least) AFC Wimbledon. The clubs internet fans forum, like every other clubs, is full of scathing remarks and constant moaning, and it would appear that plenty of this is aimed at their aging centre half.

Watching him for myself against visitors Bath City, his ability to read the game was obvious, his ability to carry out his duty on the other hand, a little harder. Kings of the backpass, Sutton constantly played the ball around their back four during the first half with it frequently returning to Kevin Scriven in goal, much to the irritation of the five hundred odd crowd. I noticed when defending a corner Stuart used his chest (he's filled out an awful lot since leaving Charlton) to barge a player out the way. Their foreheads met like two rhino's about to lock horns before the Sutton captain moved away and found the player he was supposed to be marking. Intimidation is obviously the name of the game, he hasn't changed that much.

The second half provided slightly more determination from the home side who had gone into the break a goal down. If the finishing had been just a tad (or in hindsight a lot) better they could have justified a point from the fixture, but alas it was too little far too late and Bath pounced again at the death to make victory certain.

Despite the result it's always a pleasant experience taking in some non league football, it harks back to the 'good old days' in so many respects. Bath City looked like Newcastle United in their black and white striped shirts, complemented with black shorts and stockings (that's what we used to call them).
At no point did the referee or linesmen think their very traditional all black attire would clash and therefore make the visitors wear an away kit.
And in case you're interested, Paul Doswell, the Sutton manager's job is secure and still will be even if they fail to get through to the third round of the Surrey Senior Cup next week, unlike the circus that is Chelsea and their need to keep buying success.
There is proper football, played in the mud and then there is soap opera television football played in London SW6.

So is Jamie Stuart dench? He certainly threw away a great opportunity to fulfill his potential, although in his twilight years as a player he still lives a dream i never even came close to. That's kinda cool innit?