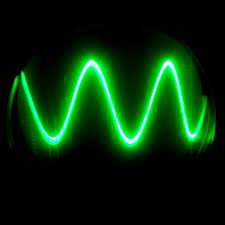 I know very little of mathematics, science, or engineering. My understanding of the word 'oscillation' is very limited, to me a sine wave represents one thing, supporting Charlton Athletic. There are ups and downs, highs and lows, but don't get too comfortable, fortunes change like the wind.

Going a month without a win and throwing away a winning position twice in as many weeks, Charlton had two away games in four days to try and get back on track. Against both Palace and Birmingham no-one could ever doubt our work rate, but the same old story of lapses in concentration and a failure to capitalize had left the Addicks feeling quite despondent.

This despondency carried on into the weekend as our trip to Hull proved fruitless. Again the team were credited with hard work and determination against one of the better sides in the division, yet it was a cruel moment of luck rather than skill that gave the home side all three points. Hamer came out determinedly to deal with a corner but missed the ball which landed in a posse of players and could have gone anywhere, Hull's Egyptian striker Mohamed Gedo turning the ball home. Fortune favours the brave,unless the brave come from SE7.

No time to dwell on events though, a Tuesday night fixture at another promotion candidate, Leicester City, could be the catalyst to get the season and the main priority of safety back on track.

One man who would not be heading to the King Power stadium (even the cheesiest bad guy in Hollywood or the WWE is named better) was Bradley Wright-Phillips. The out of favour striker, who may well have played his last game for the Addicks at Hull has moved across London to Brentford on loan to see out the end of the season. He was of course very close to signing for Swindon with Danny Green on the final day of the transfer window, but that fell through on a technicality. Bradley was Chris Powell's first signing as Charlton boss, he ended last season with twenty two goals and certainly became a fans favourite. Unfortunately he has found the step up a little harder than most but will, I suspect, bolster Brentford's own promotion campaign alongside another former Addick, Paul Hayes.

A Charlton striker most definitely not missing the trip to Leicester was Yann Kermorgant. The big Frenchman had a fair few boo-boys to silence and a gigantic ghost to lay to rest. He spearheaded the gaffers preferred 4-5-1 formation with countryman Dorian Dervite once again protecting the back four.

From the off the boos rang loudly around the stadium, how often had we done similar ourselves only to be silenced when Defoe and co have found the net triumphantly! Yann Kermorgant had read the script perfectly and duly obliged with a goal after twenty minutes. The resurgent Scott Wagstaff kept an almost lost cause in play, Pritchard won the ball and centered it for Yann to shoot home. Now you or I would have run to the home supporters to tell them in no uncertain terms who was having the last laugh but Kermorgant is far too level headed for that. Classy footballers let their game do all the talking. Some said we have our very own Eric Cantona but there was no post match speech on trawlers.

Very recent history has told us that this work ethic and endeavor doesn't necessarily produce results, remember the sine wave? Not only can that define our season, it's a pretty accurate match report in itself too. Almost on cue, with twenty minutes remaining Charlton's defense of a lead faltered. A quick, flowing, passing move culminated in New Zealand striker Chris Wood slotting home from the edge of the box. Chris Powell knew action needed to be taken, despite this setback the points were clearly there for the taking. Frequently abused for his use of substitutes (on here as much as anywhere else), he brought Danny Haynes on for Dervite. A minute later we were back in control.

If it wasn't for a cruel tragedy of injuries, Danny Haynes would I'm sure be plying his trade in the top flight by now. He has already produced a goal of true finesse this season against Derby County, last night he topped it. The ball came over his left shoulder, he let it bounce, gained his composure and volleyed it home from twenty five yards out. The celebration in front of the 650 away supporters told it all, passion and relief by the bucket load.

This time there was no mistake, no late drama. Charlton had won and done the double over much fancied Leicester City. That by anybody's standard is a sign of Championship quality and perfect form to take into Saturday's home clash with Nottingham Forest. It should be quite a game, Forest destroyed Huddersfield 6-1 last night.

No matter what your views are of Slater and Jimenez, the 'unknown' boardroom events going on behind the scenes, the rise in next season's ticket prices or any other controversial happening around the club, we do at least still have our Charlton. The clubs hearts beats strongly and it's still a huge part of and benefit to the local community. I'd much rather my identity and with it mid table obscurity than promotion to the 'promised land' and no soul whatsoever.

Cardiff City's re-branding did of course take the football world by storm. Supporters walked away from the club they supported all their lives and the campaign against modern football took another step forward gaining bountiful support. Yet plenty renewed their season tickets rather than voting with their feet, and for this they were 'rewarded' by the clubs Malaysian owners. Upon entry to the ground last night for their clash with Brighton and Hove Albion, each supporter was handed a free red scarf at the clubs expense. This isn't Germany, where football supporters cannot be bought, so many took the said item gladly and wore it proudly around their necks. I've even been told that supporters entering the away end were handed one too. I suppose the board feel Brighton is also a catchment area, well it works for Manchester United.

One supporter took his scarf and did exactly what any true lover of football would do. God bless him! 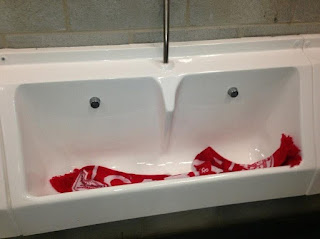 Posted by algordon_cafc at 4:46 PM