Quality always shines through in the end 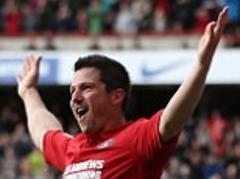 As so it ends. A final match to reflect the season as a whole, starting quietly but finishing with fury and finesse making sure everybody else sits up and takes notice. Charlton Athletic are going to be one to watch next season, be sure of that.

Unfortunately for me, they weren't one to watch yesterday. Rather than enjoy the end of season atmosphere of the local pubs in SE7, I was in Crawley at a wedding. As weddings go it was a lovely day, I caught up with an old friend who was over from Northern Ireland for the do, we snuck out for an hour to the local pub and discussed the lack of planning of the date. He's a rugby fan and holds a season ticket for his local club, their last league game was also this weekend. On the plus side I got to dress up in my new whistle, looking sharp and then owning the dance floor when One Step Beyond came on.

Throughout the service I was checking my phone, not only to see how the Addicks were faring but also to keep an eye on the drop zone. Huddersfield were leaping about all over the place, whilst Barnsley and Peterborough also both occupied that third relegation spot at times during the afternoon. This division hasn't failed to deliver all season and once again it lived up to expectation giving a thrilling finale to all but those poor Peterborough fans. Twice in front, a draw would have been enough to keep the Posh up, but those darned Eagles swooped in the final minutes of the game to break the hearts and end the hopes of a very plucky Peterborough side. Crystal Palace certainly know how to win friends!

Peterborough look the best bet to bounce straight back. Wolves were dismal at The Valley recently, the club are certainly in turmoil while yesterday's visitors, Bristol City, simply haven't looked good enough for a while now. Down and out, a 4-1 defeat seemed a bit of a cruel way to finish them off, but quality always shines through in the end. This squad has it in abundance and Chris Powell has finally discovered how to dispense it.

After a season where home wins were, to coin a phrase, like buses we turned the awful home form around and finished with four straight victories. Yann Kermorgant finished with a brace that could have so nearly been a hat-trick, Jonathan Obika (possibly the most successful loan signing since Jorge Costa) finished with his third goal in front of the Covered End while skipper Johnnie Jackson rounded his season off in style scoring a very commendable twelfth goal of the campaign from midfield. Will the skipper scoop the player of the year award tonight at The Valley's traditional end of season event?

This Saturday sees one of the greatest institutions of English football, the FA Cup final at Wembley. At a time when the FA are quite happy to let the grand old cup competition fade away into the background to concentrate on Sky and their more 'money making' ventures, it's easy to take this season at Charlton for granted. Remember, last summer we had no money to spend and many feared the worst. I have no idea if that situation has changed for the better, twelve months further down the road, but lets just take comfort in knowing we have some stability. This week I signed up for membership of the Supporters Trust; these are turbulent times for all but the biggest of football clubs and it's never been so important to have some voice in how your club is run. Their website states "The Trust has been formed to give fans a voice and to act as positive force to help preserve Charlton Athletic Football Club for its fans and community." It's very early days in the life of the Trust but at just five pounds a year for membership, it's got to be worth our support.

There is one last hurrah for me this season, Sutton United entertain Godalming Town in the final of the Surrey Senior Cup on Wednesday evening. When the final whistle blows at the end of that game the curtain really will have come down on my season. Roll on August.