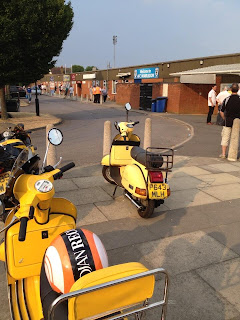 It felt like the other Kingston tonight, not the one residing upon the Thames. A shatteringly hot day in South London, who'd have thought the Cherry Red stadium was named after a record label and not the colour of our heads after all this sun.

My first ever visit (I think) to the ground which many know by the name of Kingsmeadow and I have to say I enjoyed it. I did once watch Sutton United in a Surrey Senior Cup final at Kingstonian's ground in the late eighties but I think that may have been their old Richmond Road ground. We stood tonight down the length of the pitch in a terrace with a low roof built for noise and atmosphere. This would be a great ground to get drawn at in a cup match.

It was the other team from Kingston, AFC Wimbledon that hosted Charlton this evening though, the Addicks first teams third pre-season friendly and the first since returning home from Spain.

Charlton put out a strong side which featured both our trialists from the off. Richard Wood partnered Leon Cort at the heart of the defence while Yann Kermorgant lined up alongside Adamo Coulibaly, a fellow Frenchman who has spent the last four seasons in Hungary playing for Debreceni VSC. A tall powerful front man with a good turn of pace, the 31 year old is only with Charlton for a week and hopes to impress. He got a good hour in tonight but is a week or two behind the rest of the squad when it comes to fitness.

As is the case with pre-season friendlies, the football was quite low key and the challenges mild. Moments of note were few and far between but Wimbledon had by far and away the best chance of taking the lead when a good ball from just outside their box from a lad with a little Jason Lee pineapple thing going on put through their striker who rounded the keeper and had the easiest of finishes to put it away but somehow hit the foot of the post instead, up there with Ronny Rosenthal. It transpires apparently that Button clipped him and the home side were claiming it worthy of a spot kick. Just looked like a comical miss to us.

Danny Green put the visitors in front with a lovely strike a little later, only for Wimbledon to equalise on the half hour as the Charlton defending went to pieces. A lad on the back post was ignored by all and left alone to calmly nod home when the ball floated over everyone else. Stealth like he was, except to the three hundred travelling fans, we all saw him.

The highlight of the second half except for the officials change of tops (from murky white/grey to yellow) was a sublime piece of skill from Kermorgant. He won the ball on the edge of the box from a Dons defender, turned and tried to chip the keeper. Chip him he did but unfortunately the ball went just over the bar, it was exquisite and deserved a bigger result.

Speaking of shirts, we saw tonight the new N**e home shirt for the first time and I must confess, it looks a lot better on a football pitch than it does on a mannequin (or for that matter an overweight fifty-something on a terrace). It did help that it wasn't violated with either a shirt sponsor or a players surname although that little peek through a retro keyhole won't last for long!

The linesman on our side made a name for himself with his balding head, his rather large waistband and his total lack of understanding as to why a goal kick is awarded. He then proceeded to lose his rag with Bradley Pritchard while the Charlton player was warming up for reasons only he could know. He got quite heated and for a moment looked capable of a Basil Fawlty explosion. Needless to say from this moment on he was heckled non stop.

The final whistle blew and one youngster next to us hurdled the advertising hoardings and ran onto the pitch, not to cause a disturbance but for a laugh and to show off to his mates. This kid didn't really know what to do once there and circled the players before legging it as a steward walked towards him. Good old Kingston police, they must have a quiet life as when we exited the ground one bobby was making it his sole purpose of the week to find this youth and lay the law down. Never have I seen a more peaceful pitch invasion or such an unnecessary manhunt.

A 1-1 draw in summer evening sunshine, a pint or two with friends I haven't seen for far too long, yes football is back. The pre season is as much for the fans to get back into it gently as it is the players. Me, I'm feeling almost match fit already.