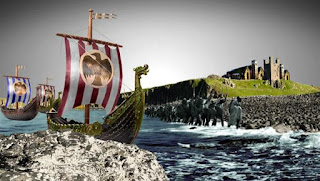 For those not in the know, we are currently enjoying a very large Mod revival. The clothes, the haircuts, the music and the scooters haven't been this popular for half a century. But then everything keeps on coming back, it just needs a little publicity; who'd have ever thought the baker boy cap would enjoy such a resurgence (especially south of Watford), and that particular item can give thanks to the superb Peaky Blinders television series for it's new found popularity. After Saturday's game against Hull City, don't be surprised if Viking helmets become de rigueur in SE7.

It was very much the tale of two Nordic explorers, Simon Makienok and Johann Berg Gudmundsson. The big Dane scored his first goal for the club whilst the tricky Icelandic wide man scored a last minute winner after earlier missing the opportunity to put the game to bed.

Makienok hadn't looked much like a Charlton hero when he first arrived at the Valley. A big imposing man, he struggled to make that advantage count and looked far too soft in the challenge. But game by game he's improved, to the point where the North Stand's rather tongue in cheek shout of 'Leaburn' has almost disappeared. The occasional header still goes off at an array of unprescribed angles and Usain Bolt he most certainly is not, but he's a target man for when we break and that's been missing for some time now.

I had always said his first goal celebration was going to be something elaborate, I'd secretly expected (hoped for) a Metallica style air guitar solo, it wasn't quite James Hetfield but we got so much more than an axeman impersonation. The roar of a lion as his hair was set free, falling to his knees on the way back to the half way line, getting there and again raising his arms skywards (as we later found out in homage to his mother), then once play had resumed there was still time for a quick fist pump! The man has a battle cry of a true warrior, the best (and most prolonged) goal celebration I've seen at the Valley, you can keep your backflips and somersaults. If you're interested, he'd pounced at the near post to get on the end of his fellow Nordic seafaring comrades cross to score the goal, but what followed outshone it in every way possible.

The goal came near the start of the second half, the first had been truly forgettable and had given no indication of what we were in store for. If Hull are truly one of the promotion favourites then we've nothing to fear this season. Other than the now traditional end of match nerves we outplayed them in every department looking keener and sharper both on and off the ball. Gudmundsson had perfect opportunity to double the lead when he broke through and was one on one with the keeper but failed to capitalise in a true Tucudean moment, while young Karlan Ahearne-Grant who had replaced Ceballos midway through the first half was desperate to add to his goal against Dagenham & Redbridge and seal the victory shooting whenever he had sight of goal. It wasn't to be and a second league home win was to be snatched away from us, or so we thought.

Hull had given us a couple of warning shots, one of which hitting the upright as we struggled for the first time in the game to keep the ball and move it forwards up the pitch. Sure enough as Charlton is Charlton the visitors pulled level with just sixty seconds remaining of normal time, Pope in the addicks goal stopping a fine shot but unable to gather it and Abel Hernandez knocking in the rebound. On the whole an undeserved point for the Tigers but lessons on professionalism to be learnt. Eight minutes of stoppage time were only going to affirm our disappointment, Hull again dominant in attack and once again getting the ball in the back of the net only to spot the linesman's flag saving the day.

Plenty of Charlton supporters had already started their journey home when the Nordic pair once again pillaged in the Hull half and pulled out a 98th minute winner. This time the Dane was provider heading the ball into the path of Gudmundsson to nod home for a rare headed goal. The place just erupted. Luzon ran from the dugout like a crazed man and jumped on the pile of red shirts mobbing the goalscorer, right in front of those on the fan sofa who had place of honour to watch the celebrations. I'd have joined in if it had been me  pouncing off that couch, and no doubt I'd also have been sent off alongside our manager to watch the last couple of kicks in the stand.

It was that type of moment you only ever get once or twice a season, I walked out the ground feeling like we'd either just been promoted or reached the cup final. We've seen two of last seasons Premier League clubs at the Valley this month and beaten both of them, not to mention two great away points at Derby and Forest. Not bad for a club that's reportedly relegation fodder!

I know kids designed them, but who's for replacing the new knight and robin mascots with Hagar the Horrible from now on?

Posted by algordon_cafc at 8:17 PM