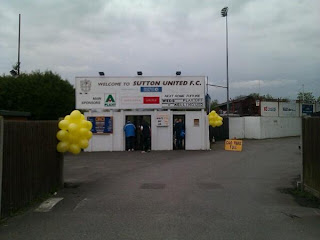 The balloons were out in force, the spirits in the clubhouse were high, there was no doubt Sutton United had embraced this play off match with both enthusiasm and belief. The grey skies weren't going to ruin the party, but could Welling?

Sutton have enjoyed their first season back in the Conference South division. After winning the Ryman (Isthmian) league last year, many were hoping to consolidate their standing at this higher level with a good mid table showing. Ideas of back to back promotions were just a romantic dream.

For those who don't know, Woking walked away with the league ensuring an immediate return to the premier division. A very strong looking Dartford side led the chasing pack with Welling, Sutton and Basingstoke Town filling the other play off spots in that order. Fourth spot was a wonderful achievement on it's own, but where would this season end?

Welling United brought great support to Gander Green Lane. I'm not particularly good at estimating numbers but I'd have to say at least 300 of the 1200 plus crowd had travelled from the London borough of Bexley. Considering both sides have averaged gates under 700 this season, and that the rain was  once again forecast for the evening, I'm sure you'll agree with me that supporters of both sides had been captivated by the prospect of promotion. It certainly helped give the atmosphere of a cup tie to the occasion.

After what seemed an age, we finally got under way, both sides looking nervy in the very forgettable early exchanges. Welling started to settle, passing the ball on the floor and pulling the home side out of position. When the visitors went ahead half way through the first half i felt, unfortunately, that it had been coming for a while. A nice cross from the right was met by the head of Lee Clarke which he guided past Sutton keeper Kevin Scriven. I would tell you about the last ten minutes of that first forty five and how Sutton tried to claw themselves back into it but, alas, i had made an early departure, with fellow Addick and Sutton fan Jim McGinty, to the bar to beat the rush.

In fact, being a Charlton fan, I'd had to endure a fair bit of stick during the day as many Addicks think of Welling as their second club. Forget that Manchester derby on Monday night, this really was a game to split families!

Sutton certainly took the game to the visitors in the second half as the match started to heat up. Sutton's ball into the final third had looked a little hopeful at best in the first period, but they took a more threatening stance in the second. The only trouble was Welling always looked capable on the counter. I was to be proved right.

A spell of pressure from the home team ended when Craig Watkins connected with a ball into the box, the Welling keeper looked to have it covered but could only help direct the ball into the net. The covered terracing behind the goal erupted as Sutton were deservedly level after continued hard work. You had to spare a thought for the visiting keeper who had made a couple of good saves prior to the goal.

The winner just minutes later was superb. Welling broke with the very pacy Loick Pires taking the ball almost half the length of the pitch before centering it for Joe Healy to tap in. It's well worth watching for yourself here. The referee did well to allow play to continue as before Pires had got the ball a Welling lad was pulled to the ground as the ball went over their heads.
Not the way I'd hoped it would pan out, but a great advert for non league football nonetheless.

A good platform for Welling to take into the second leg on Sunday. You'd expect the winners to meet Dartford who won their first leg game at Basingstoke 1-0. Sutton though have already taken a draw at Park View Road this season and are more than capable of going one better at the weekend.

Whatever the outcome, this has been a season to remember for the U's. A successful league campaign, a Surrey Senior cup final to look forward to on Tuesday against Woking, not to mention a great run in the FA Cup defeating Kettering Town to set up a televised second round tie down the lane against Notts County.

The sad and premature passing of former captain and manager John Rains earlier this year has been a dampener but you know the former Sutton legend would be proud of what the club has achieved during the 2011-12 campaign.

Come on you yellows!
Posted by algordon_cafc at 5:29 PM