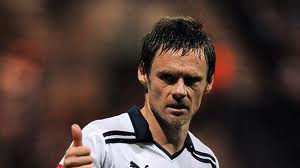 Was today's game at Deepdale the first time I've listened to Charlton on the radio without fretting? Probably. Normally in this situation I'm a mess, today i resembled a cucumber with my cool temperament.
When the second Charlton goal went in, from Dany N'Guessan, my sister in law who is staying for the weekend turned around from her knitting (or whatever she was doing) to see if i was jumping about. I just gave her a smug look, no need to punch the air or anything, we are after all deserving champions.
That smug look may have cost us the win I'm afraid.
Smugness is not a fruit of the spirit is it! The big man would've frowned at me for that one!

The last away day of the season has for many sets of supporters around the country become a day of fancy dress. Charlton kept up this tradition with a selection of bananas, cats, Toy Story characters and even Robocop amongst our ranks. Twitter was awash with photos of these characters making their way up north. A part of me wished the ref would have to go off, just so Robocop could put his boots on. That would guarantee no backchat!

After promotion followed by the championship, this weeks task was to achieve the magic 100 points. For a while we were on course for it. The beauty of the modern age is the current 'live' table. This of course showed for the majority of the match that we had indeed achieved the ton. We will have to wait until next week for this though, but it will be another aspect to the party that ensues at The Valley next Saturday instead.

The game itself saw Chris Powell make plenty of changes with the likes of Sullivan, Evina, Taylor, Cook, N'Guessan, and Haynes all getting a start. The gaffer had said beforehand he wanted to give squad members a run out to let everyone enjoy what we had achieved this season. Many said at half time that the Charlton reserves were winning. If that's was the case, they got stung in the second. Playing into a fierce wind, strong enough even to blow away all the commentators notes, Charlton faced a different proposition with Preston determined to give the home fans something to cheer. Nobody would have guessed they'd have a memory of a lifetime moment at the finish.
And the Charlton commentators wont leave home without a paperweight again!

Danny Haynes picked up the ball from a great Danny Green pass (who himself was to hit the post shortly after) and got of the mark for us after negotiating the ball pass the keeper and slotting home. Number two was from Dany N'guessan who got another goal to add to his Addicks tally just after the half hour when he seized on a defensive blunder and slid the ball into the back of the net.

Two up then at the interval and cruising to our sixth win on the spin. Like i said however, North End were not going to lie down and let us stroll it. They may well have had the sort of team talk our own Chris Powell is famous for giving.

A low shot from Nicky Hunt from twenty five yards out beat John Sullivan at the near post in the Charlton goal meaning under normal circumstances we'd have the nail biting finish we're so used to. Not today.
Even when the equaliser went in in stoppage time it was hard to be disappointed. Charlton fans around the world must have struggled with that one. Normally we'd all jump on the moaning bandwagon and stay there all weekend. To throw a win away and not care is simply awkward on so many levels!

As soon as Graham Alexander entered the fray with just six minutes left on the clock it was a given fact that he would have a 'Chris Powell' moment.
Forty years old, his 1000th and final appearance, the curtain was to come down on a twenty two year career with a goal. With the crowd baying him to shoot when the ball came near him, his own Powell moment finally happened from a free kick on the edge of the box.
Nobody else had a chance to take it and all 12,000 in the crowd, including the away supporters, were probably willing the ball into the net. Well if we weren't actually willing it in, we certainly didn't begrudge him it. What better way to lose two points.

On a day then when Preston had nothing to play for and we had the chance to make all the headlines Gary Alexander turned it all on his head and made the game memorable for totally different reasons.
Respect to him. It should have been about the number 100, he added a nought.

Competitive football isn't over for me this season though. Sutton United beat Farnborough today to seal a place in the Conference South play offs. They face Welling  United, the home leg at Gander Green lane is on Wednesday night. I'm looking forward to a real battle and some football with everything riding on it.

Come on you yellows!

Posted by algordon_cafc at 9:01 PM