The 'magic' of the cup 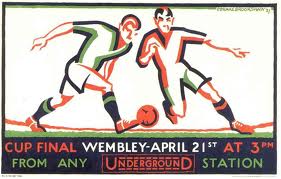 It's fair to say that over recent years, many of the bigger sides in England have treated the FA cup as an also ran competition, one in which they can bleed new youngsters into the first team in front of half full stadiums. After all, it's not got the money in it that the Premier League has, or more importantly, the potential lucrative windfall that is Champions League football.

I can understand that, especially from a business point of view for club chairmen, and i can understand the lure and the possible furthering of careers for managers and players alike. In fact, everybody is quids in if you should be fortunate enough for a run in Europe's premier competition.

For the Football Association to belittle their own challenge cup competition however is another matter. A competition dripping with so much heritage and tradition, it is close to becoming a mockery. If I owned and ran the oldest knockout football competition in the world I'd keep to an age old formula and not bow down to peer pressure from Sky, ESPN, FOX 'soccer' channel, UEFA, FIFA or anybody else who fancies sticking their oar in. OK, so in real life it's probably a lot more complicated than that, but the FA once again appear to have no backbone let alone sense of dignity. Just look at the situation with our national teams managerial position. That job has been one of controversy since the Don Revie fiasco, and Cloughie proved they won't listen to anyone who knows, and speaks, his own mind.

I am of course a little put out by the late kick off of the final this season, but more of that in a bit. The semi finals beforehand produced their fair share of debate.
To have one at half twelve on the Saturday and the other, Sunday at six is bizarre enough. Add to this that the two sets of fans who have to travel miles get the early one is just crazy. Yes, i fully understand why Liverpool didn't want to play on the Hillsborough anniversary, but surely they could have kicked off at three on Saturday? Also, why so late for the two London sides on Sunday? That wasn't really an afternoon or evening kick off. There must be occasions, but I'm struggling to think of another game that's started at six. A little respect though for those who did come down from Liverpool, that game had a larger attendance than that of the local sides.

Apart from the awful scenes during the minutes 'silence' before Sunday's clash from some sections of supporters as ITV linked in the candlelit service from Anfield, every other travesty is surely the doing of the FA. This includes the fact that the semis were held at Wembley in the first place. Remember the bit about tradition?
Villa Park, Old Trafford, there are loads of grounds which are suitable for staging the seventh round of the cup. And plenty big enough they are too. If the Merseyside derby had been held in Manchester I'm sure every season ticket holding supporter, and other frequent visitors,  would have got in. Let's face it, these occasions are for the real paying fans who live and breathe their clubs, not the glory hunting arm chair supporters who come creeping out of the woodwork when they smell success.
I guess that it's all money spent elsewhere though and not going towards paying for our national stadium.
Get a big American stadium rock band to play a couple more gigs instead i say, and keep the things we love about this great old competition unadulterated.

May 5th does then see the grand final, the showcase of all that English club football stands for. Around the world millions of excited viewers will tune in, from luxury homes in Beverly Hills to villages gathered around one old television set in distant parts of Africa, all eager to watch the latest chapter in the history of football's most respected competition. Everyone that is except real football fans. The bread and butter fans that keep the FA's wonderful league structure of 92 professional clubs intact.
Yes, fans of League One and Two clubs will be watching their sides play their final game of the season. When Liverpool and Chelsea kick off on Wembley's hallowed turf, we will be boarding trains to make our journeys home.
Not to worry, at least i can watch Chelsea play Barcelona on the box tonight though, thank you all you rich large corporations that made this possible.

Except i don't really want to watch Chelsea play Barcelona. I want to watch an FA cup special of 'Question of Sport'. What i really want is to be able to know that the curtain is coming down on England's domestic season with the final game, the big one, the cup final. And i want this at 3 o'clock in the afternoon, and when the final whistle went on every other game days beforehand.

As a kid i watched the television cup final morning from the minute the coverage started to the the moment it finished. Not only did i see the winners parading the trophy around the pitch in scarves and stupid hats, i saw them eating breakfast at their hotel hours earlier. Well not quite, but you know what i mean. I'd sit there with my Panini sticker albums spread out in front of me alongside the cup final special edition of Shoot! magazine. My Grandad would arrive later and sit in the armchair behind me grumbling about both the stupidly short shorts the modern footballers wore and their phobia of good old fashioned barber shops. It was an event that not only brought families together, but communities as well.
I could be wrong, but it would seem to me that Britain today could do with a bit more of that.

Hopefully I'll be celebrating Charlton's title win on that day, so will no doubt catch some of the match on the big screen of a local public house. It's very unlikely I'm going to watch much of it though. I can't watch it with my Grandad as he passed on many years ago and my Panini albums could be anywhere, they are now unfortunately just a distant memory, but me trying to turn the clock back misses the point. The FA turning the clock back doesn't.
This is the only FA cup game that should be played at Wembley, a prize reserved for the finalists, it should be at 3 o'clock, because that's when football kicks off, and all football fans should, if they choose, be at home to watch it.