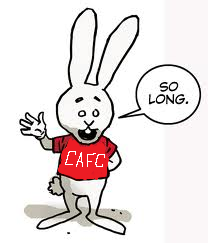 The Easter message. There's the big one, we all know that. Then there's everybody else's message. Trenton Oldfield had one in the Thames at Hammersmith Bridge although nobody is quite sure exactly what that message really was, other than one of plain stupidity.
Steve Evans obviously had one leaving Crawley Town for Rotherham weeks before the end of the season. His was ( I could be wrong and have misjudged the man of course) the same as always, money over loyalty. This is a career that is always going to be one of controversy wherever he plies his trade.

Both of these messages are more self centered than the all important one, but are at the same time guaranteed far more publicity.
Then there's the message from Sheffield. Both clubs have won their last four and are finishing the season on fine form. One of them will go into the play offs all guns blazing. It is of little consequence to Charlton though how well, or by how many, the steel city sides obliterate their opponents. Not as long as we hold it together until the finishing tape.
Manchester City could do with taking note here. Roberto Mancini, if you want an Easter message just ask Chrissy Powell.

The message from south east London this Easter is one of hard work gets results, although at times it could of been translated as hard work to get results. Even that would suffice right now for the Italian and his team of highly paid superstars.

Two 1-0 victories in the space of three days is all that matters. I really don't care if we finish first with banners and fireworks, or if we finish first quietly without anybody even noticing. As long as we finish first. We've been top since early September, i want to see that trophy paraded on May 5th at the Hartlepool game.

Saturday's game at Oldham saw the Addicks once again do things the hard way finishing with nine men after, first Hollands, then Wagstaff enjoying the delights of an early warm bath in those perfectly British bank holiday weekend conditions.
An early second half goal for Yann Kermorgant was the winner, but it was the three red cards and the numerous amount of yellows that will stand in the memory. The referee, Trevor Kettle, the latest in a long line of officials this season to look, at best, incompetent once again writing himself into Charlton Athletic folklore.

Six hundred Addicks watched as Charlton dug deep and hung on for a very needy three points. This was admirable stuff but physically could go on to haunt us two days later against Walsall at The Valley.

And to large degrees it did. An unbalanced midfield without Danny Hollands at the heart, Charlton made hard work of keeping a spirited but rather poor Walsall side at bay. If they'd had a little more class up front we could have been punished.
The communication between Morrison and Hamer at the back, or more to the point the lack of it, gave rise to that horrid feeling of the old ticker skipping a beat or two.
Morrison had been one of my contenders for player of the season so I'm granting him an off day. I've said before how he reminds me a little of former favourite Eddie Youds, well, his current partner has a little touch of the Richard Rufus about him.
Leon Cort has looked a tower of strength after coming in for Matt Taylor recently. Again he had a wonderful ninety minutes yesterday. His achievements have been more than capable in the Championship before and i reckon he's definitely got another season in him at that level.

Dany N'Guessan scored the games only goal, his third for Charlton in five outings. His arrival does seem to give us another attacking dimension and his connection from Jackson's free kick was delightful, a real high in a game deprived of much excitement or flair.

Post match in The Kings Head at London Bridge we watched West Ham struggle to find form against Birmingham with a group of Southampton supporters. It dawned on me that they'll be joining Norwich in the top flight of the English game next season. The two sides we got relegated with into the dark depths of third division football. It really sank home how important getting promoted this season is!

In closing then we are still completely in control of our own destiny and now with only twelve points remaining. No matter what the others do, time to catch us is running out. I'll quite happily take four more rather boring one goal victories.

Come on you reds!
Posted by algordon_cafc at 7:45 PM