And now you're gonna believe us 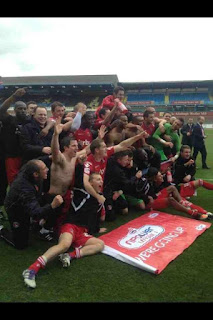 Saturday April 14th, the day Charlton Athletic got promoted out of the third tier of English football.

It has been a long three years, we've seen the two sides we went down with, Norwich and Southampton, both have a real change of fortunes while we may have felt like we had been left behind.

Now though our day has come. Chris Powell has built his team, the new owners have backed him all the way and this season will be one that lives long in the memory. It has been a delight to watch the team play, and it's a few years since any Addick can say that.

It took a Bradley Wright-Phillips goal to see off Carlisle resulting in us sitting ten points clear of Sheffield Wednesday, (who only managed a draw at Colchester) in third with only nine points left to play for. That £240 i spent on next season's season ticket seems even better value for money now!

Three games of third division football left then to enjoy promotion, revel in the party atmosphere that will embrace these games and then go up eventually as champions.

Oh, and i can book a holiday for during the play offs.

I think a couple of beers are on the menu tonight.

And now you're gonna believe us, the reds ARE going up!

Posted by algordon_cafc at 6:02 PM