Friends of this site, The Football Attic, recently posted an article on designing your own football kits. This brought back many memories for myself as i used to keep out of mischief as a child colouring in many fantasy designs for both real and imaginary sides.
Not only did i now know it wasn't just myself that had these obscure past times as a kid, but also that i wasn't the only one hankering after another go at it! 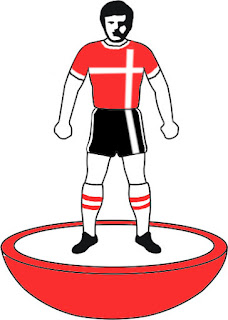 I'd been down memory lane myself recently with a post on subbuteo, so i was most definately in the right frame of mind for designing some footballing gems at this far more mature age.
The league of blogs is a little project The Football Attic have set up for bloggers to do just this. It's not by invite so feel free to try yourself. You simply colour in the blank table football man template!

Above is the home strip for God,Charlton and Punk Rock. The large white cross emphasises my Christian beliefs, although it is offset slightly for purely stylistic reasons. The upright of the cross carries on down the shorts as I've always been a fan of that feature. Coventry's Talbot kit, Orient's braces, Aberdeen's Admiral stripes were all fantastic. I thought it was a thing of the past but last season Wigan brought a welcome return to that particular 'look' with a broad white stripe going top to bottom. The red and white are obviously Charlton colours and the black shorts bring in the colours of the blog nicely. 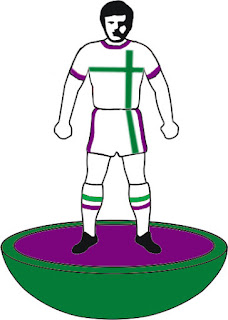 The away kit mirrors the home design but just changes in colour. The mid to late 90's saw Charlton wear the colours of the Wimbledon Lawn Tennis Club, as kit manufacturer Quaser made a couple of offerings in the green and purple. I was always a fan and even once had an official matching baseball jacket. Dreadful really, but i loved it at the time.

My technical abilities on the computer aren't really up to much so i printed the blank templates off, coloured them in with good old fashioned coloured pencils and then got Heidi, my wife, to photoshop it.
I'm sure she thinks I'm regressing a little but hey ho.

As Keith Barret used to say, it's only a bit of fun!
Posted by algordon_cafc at 1:49 PM

Email ThisBlogThis!Share to TwitterShare to FacebookShare to Pinterest
Labels: Subbuteo