Anyone seen the key to the trophy cabinet? 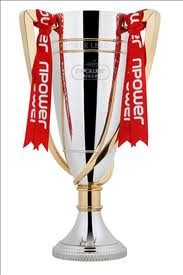 My Saturday was not at The Valley but at my sister in laws 21st birthday bash. This event had been organized and planned for weeks in advance by Heidi, my wife, and to escape for a few hours in the middle of the day would have been to commit domestic suicide.
So instead of being part of Charlton's greatest day in over a decade, I was dressed as the Mad Hatter at an Alice in Wonderland inspired tea party.
Why was i so late in knowing of the Addicks great achievement? This tea party was held outside of the signal coverage from my network provider 3, and no matter how many march hares, cheshire cats or red queens i asked, no one had an interest in, let alone seen or heard, any football results.

Wycombe Wanderers were visitors and their need for the points was far greater than ours. From what I've seen in the extended highlights, that showed on the pitch.
Yann Kermorgant's first half free kick was delightful to put us in front although the Chairboys front man Stuart Beavon gave the visitors hope by leveling just before the break.
In Milton Keynes the franchise were a goal to the good against Sheffield United at this point. If it stayed like that and we scored.........

And that's just how it panned out. For the first time in my life i was glad to see a win for Buckinghamshire's other league club. After the controversy surrounding a certain Ched Evans, the Blades fans were having a torrid weekend, especially the six thousand they reportedly took away to the new town.
Substitute Dale Stephens scored his fourth of the season a quarter of an hour before the end to seal it for Charlton, and after the final whistle, with the players still on the pitch, news came through from the Stadium MK and this sparked some wonderful scenes of celebration.

Mark Ritson posted a superb video on you tube of the events after the final whistle, the highlight for all being Chris Powell jumping out the tunnel, just as we fondly remember him doing in his playing days. Watching this makes it hurt even more that i couldn't be there, although the gaffer has promised a huge party in SE7 on May 5th for the last game of the season against Hartlepool. Wild horses couldn't keep me away for that!

Promoted one week, champions the next. Wouldn't it be great if, at Preston next Saturday we could break the 100 points target. Surely then the BBC would have to give us some coverage? It was ironic that on the weekend we won the league, BBC's Late Kick Off programme got Dougie Freedman in the studio and turned it into a Palace special!

Speaking earlier of Ched Evans, there was more controversy as he was included in the PFA League One team of the year. I'm not going into the rights or the wrongs of that here, i just want to note that four Charlton players were also included. To the surprise of many, Chris Solly was not one of them.
Ben Hamer, Rhoys Wiggins, Johnnie Jackson and, my personal player of the year, Michael Morrison won this accolade.
Players regard this as the highest of achievements as it's voted for by fellow professionals, in many ways the most prestigious of honours so my heartfelt congratulations to each of them.

I've seen it said on twitter that Charlton themselves are the real league one team of the year. How true, we've been top since September, we've not really wobbled at all and in Chris Powell we once again have a hero at the helm that, it would appear, can do no wrong. This feels as good as it did for the play offs in 98 and as good as it did winning the 'second division' in 2000.
Our Charlton are back, oh how we've missed them.
And doesn't it just sound so perfect........

Posted by algordon_cafc at 8:59 PM