I see a little silhouetto of a man. 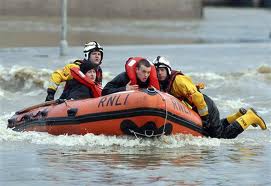 This is a lifeboat. It was on standby today at The Valley taking the place of the more traditional stretcher.

Rain is, of all the weather conditions, the one that people often refer to the bible for. Is there ever a report of thunder and lightning with torrential down powers that doesn't mention the phrase 'biblical proportions'. Overused it may be, but I'm surprised the Charlton Live team didn't mention the ark hurriedly being constructed in the west stand car park to take the visitors back up to Hull.

After the wonderfully exciting and nail biting evening on Tuesday, i was once again stuck at work and reduced to the precariously positioned lap top balancing on the tool box at the furthest reaches of our modem. Did CAFC player keep cutting out or was the wi-fi straining just to much to stay connected? Maybe it was the constant hammering of  the rain and electrical storms outside. Biblical? I certainly didn't take His name in vain but did ask a couple of times to re-connect me to the commentary with some urgency.

Another poor crowd (less than Tuesday's) did brave the elements to witness a deserved point gained for Charlton, however, the only goal they saw wasn't given.

Hull City are another good side that have recently played top flight football, thus continuing this tough start to life back in the Championship. You have to wonder when the easy sides will come around. I'm not pre-empting anything and saying September 14th honestly! (Although they did lose again today and remain bottom.)

Chances in the awful conditions were few and far between, Kermorgant and Wright-Phillips both coming close and on one occasion getting the ball in the net, with the Frenchman duly dispatching it home, but the linesman was already flagging for a presumable off side.

The best efforts fell to the Tigers in the second period when the heavens (there we go again with the bible references) really did open.
Up north they probably train and practise both in and for this weather a little more often so maybe, just maybe the conditions weren't the same for both sides?

Sone Aluko produced a wonderful double save from Ben Hamer towards the end, i can't be alone in thinking our number one is looking to have really grown in stature and confidence from the keeper he was last season. Aluko also missed an empty net when he only had to make some contact to score according to the commentary. I can't wait to see that one on the highlights.

We played the same starting eleven as we have on our previous outings but today all eleven played the whole ninety minutes. Perhaps the dugout had flooded and the substitutes had all gone down with trench foot? I'm sure the gaffer knew what he was doing.

Three games in, five points gained, possibly four lost (at least two), and still unbeaten. We'd have all taken that at the beginning of the month.

A trip to Nottingham Forest next Saturday, then a week off before the south London derby against Palace. No need for the lap top then, I've booked a Friday evening off work for a game that's bound to better the poor attendances so far, even with the offering of an armchair at home and the Sky television cameras.
If the rain is again anything like today, even the camera's will find it hard to pick out the tiny silhouettes on the pitch..........

Forest, like ourselves, have also picked five points up from the first three fixtures and with the exception of Bolton, have possibly had an easier start than us, if there is such a thing at this level.
Another stern test will no doubt again ensue.

Posted by algordon_cafc at 8:37 PM