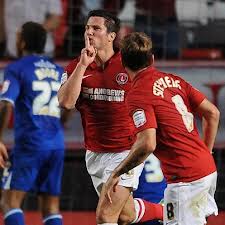 Boo boys always get silenced. Fact. Jermaine Defoe is guaranteed a goal when lining up against Charlton. It's an unwritten rule.

How satisfying must it be from a players perspective, after listening to supporters boo your every touch, to then run up to the noisiest, ugliest of the bunch and hold your finger to your lips. Just ask Yann.
The only other thing he could of done was to sing 'over land and sea, and Leicester at them', but in French i believe that loses something in translation.

It all stems from a penalty miss during a shoot out against Cardiff in the play off semi's, although it must have really had a deep effect on one Leicester fan who had far too much time on his hands judging by this song.

Pundits are often heard saying the best way to answer critics is to do it on the field of play. Last night Kermorgant quietly said 'I'm better than you' to the 1600 in the Jimmy Seed stand. We booed their left sided full back a little in the safe knowledge he doesn't score many goals.

Although the good performance and the point at Birmingham had given us a confident start, we really didn't know what to expect on Tuesday evening against one of the bookmakers favourites for promotion, Leicester City. A match that Chris Powell would have been relishing when the fixtures were announced.

It wasn't just Kermorgant and the gaffer this stood out to though, Michael Morrison had a spell with the Foxes whilst Paul Konchesky (even though he's getting on a little, i still want to call him 'young Paul Konchesky') did the opposite and last night returned to where it all began.

Another footballer to make an appearance on The Valley turf was Ricardo Fuller, unveiled to the fans at half time, who we had learnt in the Rose of Denmark prior to the match had signed for the club yesterday.
An experienced head at this level, it's not just about the earrings but the strength he'll bring to the squad, he won't be content keeping the bench warm.
Signed on a one year deal, the 32 year old will insist on giving Powell some selection problems. Our strikers will see it as even more pressure to get their shooting boots on and find a rich vein of form.
If this was Chris Powell's intention, it was a masterstroke.

Leicester started well but Charlton got stronger and stronger as the minutes ticked by, spurred on by a great atmosphere from the home support. A disappointing crowd of under 17,000, that made the noise of double that.

Eighteen minutes in and what appeared to be a bit of a speculative shot from Bradley Wright-Phillips found the back of the net. Just under a quarter of an hour later Yann Kermorgant did the same with a similar kind of effort. Cue the big man's celebrations.

The Valley was rocking, it could have been more than two, as Leon Cort tried to emulate what he had done on Saturday but was thwarted by the keeper..........Kasper, you're a ghost, Kasper Kasper you're a ghost........

Leicester boss Nigel Pearson made a couple of changes at the interval after what i guess was a fierce dressing down to a shell shocked team. It worked.
We looked very stretched at times during the second half as Leicester played some lovely football. They passed the ball around with confidence and set up chance after chance.
Andy King, not the Everton legend but the Welsh lad, was one of the arrivals after the break. Less than ten minutes later he'd pulled one back.

Charlton weren't going to give this up without a fight though. We all sang 'we all dream of a team of Kermorgants' yet in reality we had eleven hero's on the pitch. Rhoys Wiggins showed great vision going forward, Hamer did what he needed to do comfortably and without unnecessary flapping, and Bradley Pritchard looked totally at home on the right. It's hard to believe this lad was playing for Hayes and Yeading just over a year ago.

Someone at the heart of our rear guard though was immense last night. Michael Morrison, was a tower of strength putting in a collection of challenges and breaking down wave after wave of attacks.

There was a time when only the nimblest of fancy footwork superstars could wear coloured boots. I appreciate these days you can only purchase black boots from a referee's outfitters, but to wear orange boots still makes a bold statement of courage in my eyes.
We saw at Brentford last season some of the magic footwork Morrison is capable of. Last night we saw some more as the centre half threw in a couple of delicate step overs as he brought the ball out of defence.
Near the end Morrison went in bravely and came away with blood on the face forcing the ref to restart with us down to ten as the defender was cleaned up on the sidelines. The second half, as a whole, saw the tackles getting harder and harder as a mixture of desperation and desire got the better of both sides.

I never thought anyone would challenge the great Eddie Youds in my own Charlton hall of fame. How that particular scouser must be clinging on to this mantle with just a little sweat starting to appear on the brow...........

As the clock ticked down, my compatriot Jim stood next to me finding it harder and harder to watch. It had the feeling of a cup tie or an end of season six pointer, even their keeper was coming up for a corner.............in August!

The relief at the final whistle was staggering, you couldn't do that week in week out, could you?
I'd predicted we'd get one point out of our first two games, we got four. And Palace are bottom.
You've just have to smile!

Posted by algordon_cafc at 8:02 PM