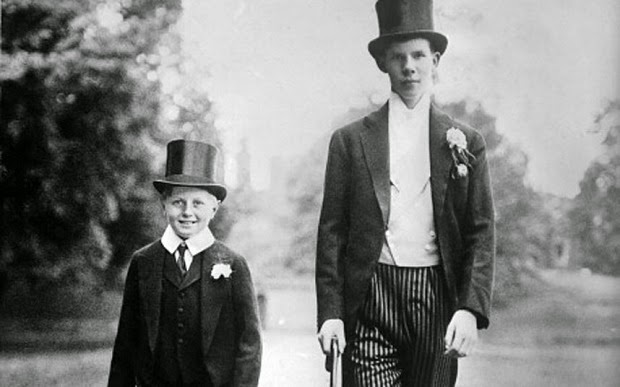 Upon hearing the name Fulham, for some of us, it conjures up the notion of 'jolly hockey sticks', a game of 'rugger' with the chaps, and a certain comedy character from the nineties. You know the one, "What an absolutely, thoroughly, bloody nice bloke!" For others of us we immediately think of Danny Murphy's wife. But we are football supporters and if anyone is going to milk the phrase 'stereotype' it's football fans, heaven knows, the Daily Mail readers are mindlessly tarring us with absurd regularity. Yes, I know what I did there.

Surely though there has to be some basis behind stereotypification? Well if I should have ever fancied a game of 'rugger' myself, the 19.01 train to Charlton from London Bridge last night was packed with suitable team mates. Harry Enfield couldn't have mimicked the accents any better, it was a public school outing into unknown territory, a thoroughly exciting time which was to be had by all. I say unknown territory for one lad, speaking to his father (master?) spotted our train pulling into Deptford and proudly proclaimed we had arrived in the Isle of Dogs. Another two were scrolling their smart phones looking for team news. They 'goshed' and 'guffawed' at the away sides selection, yet stared in puzzlement at the Addicks starting eleven. Not one of these fellows had they heard of! Terribly nice lads to share a train with certainly, but bloody dim.

Thankfully around fifteen hundred of them managed to find their way to the ground from the station to watch their side take a step closer to Championship safety. With Rotherham and Millwall both winning over the Easter weekend Fulham had found themselves back in serious contention to join Blackpool in League One next season. I'd like to think if we found ourselves in such a situation (again) we'd manage to encourage slightly more to make a short hop across the capital to rally the troops.

If Fulham are up for the fight we definitely gave some assistance and made it look easier for them. An early soft goal set the tone, to which they could have added if it wasn't for a couple of fine saves from Henderson in either half. If you thought the dreadful day in Bermondsey on Good Friday was just a blip, be warned, we've taken our foot well and truly off the gas and have an eye firmly planted on the June sunshine and sand of some far flung destination. And who can blame them. We've worked our socks off over the past couple of months to ensure safety, now the end can't come quick enough.

In the Charlton way and true to form this wasn't going to be just an end of season game to forget. We've long memories in SE7, Fulham and bad refereeing decisions go hand in hand. Poetic justice then that our equaliser rustled a few Fulham feathers as they believed a flag should have been raised for offside. A lot of us thought the same but, well, what goes around and all that.

Then of course there was Scott Parker. If you wanted to go down the stereotype road again you'd presume we'd boo him all night long. Well, long memories to the rescue again, we did. I've seen articles today on forums and other such dreaded places I really shouldn't venture near stating that it's time we grew up, he was a young lad influenced by pound signs before the eyes. Well I say bugger that. He knew what he was doing and he could have moved on to the 'big time' with a lot more class than he did. But of course that's all water under the bridge for him isn't it? Judging by the way he squabbled and made gestures to the supporters in the North stand he despises us more than we do him. My biggest grumble was our choice of song. "One greedy bastard" sang the covered end choir forgetting of course that there is Jermaine Defoe in a similar bracket and Diego Poyet too for that matter. Perhaps "Average greedy bastard" would make him feel less superior should he ever return? However, the chorus of "that's why you're going down" after the most calamitous of quick free kicks was nothing short of superb.

A Fulham free kick on the edge of the box in stoppage time had the makings of a Parker finale but thankfully we were spared the arrogance as he left it for a teammate to kick high and wide. A point a piece and on reflection a fair outcome. The last floodlit fixture at the Valley of the season and the last late night train ride home. As we queued by the shut platform gates we caught brief moments of conversations around us. This Fulham chum was mentioning something about how both he and his lady friend had shed a tear when they went to see Les Mis. I kid you not. But as my comrade Jim quite rightly pointed out, next time we are stood here it will be in the middle of a group of Leeds fans. Now if you're going to start talking about stereotyping...