Cry me a stream 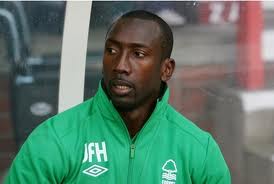 Nottingham Forest, another team very much fancied to put in a serious promotion challenge this season hosted Charlton for their second away day of the new campaign.

Would Jimmy Floyd Hasselbaink, a former Charlton player come back to haunt us and, more importantly, would Andy Reid eat all the burgers from the kiosks in the vicinity of the ground? In fact would he eat the team coach as well to stop his former club returning to London, forcing Chris Powell's champions to hitch hike back down the M1?
And why did this groundbreaking motorway now lead all the way to Dallas Texas?

After the excitement of transfer deadline day behind us, it was a chance for new signings to get their first taste of action in a different shirt.
With Jimmy Floyd and SeanO'Driscoll running things, Forest had assembled a team of Dutch speaking Doncaster fans to play around loanee striker Billy Sharp. Chris Powell couldn't resist pulling the striker to one side to gloat about his suits really defining the word 'sharp'.

Charlton were struggling to replace Chris Solly who had moved the previous evening to Hamburger SV for two million Deutsche Marks and a signed framed photo of Kevin Keegan.
In a press conference, Chris Powell stated it was the young full backs blonde locks that first alerted the Germans to him. Andy Reid is said to be as sick as a pig he hasn't had the chance to link up with Solly at his dream club.

At least Andy Hughes got the chance to come out of retirement to fill in at the back. And we all thought he'd been kidnapped.

Charlton, wearing an all black kit in mourning of the club shop, started poorly. Sure enough the old boys curse struck with Jimmy Floyd opting to play himself and scoring a hat trick in the opening five minutes.
It became apparent that the gaffer had made a slight tactical mistake playing a whole team of Kermorgants, the ten full size cardboard versions didn't seem to hold up too well in the tackle and went down as easily as the real McCoy.

Only one thing for it, the gaffer was going to have to pull a shirt on and come back for one last hurrah!

The second half was a much more even affair. Ricardo Fuller dazzled the home defence with his glitzy earrings,  whilst Emile William Ivanhoe Heskey made his Addicks debut, although preferring to have the name Leaburn on his shirt out of respect for his idol.
Johnnie Jackson, the skipper, who continued his wonderful start to the campaign then came off for Nick Berry. It wasn't just the Charlton faithful singing the Heartbeat theme tune, It was pumped out of Forest's tannoy system for the whole second period as a special request to those viewers in Finland watching the game live on TV.

Charlton clawed it back to three all as the fourth official held up a board indicating twenty seven minutes stoppage time. The Charlton bench argued his decision stating it was at least twenty eight  times that their French front man had clutched different parts of his body whilst grimacing on the ground. Forest fans thought he should have at least had a penalty whilst singing lets all laugh at Leicester.

With seconds remaining, Chris Powell came up for a Charlton corner. The ball was swung in high and the Londoners lifted their talisman aloft (in a fashion more akin to a rugby line out) to connect with the ball. Just as he was about to make contact a loud bleeping came from the tannoy, Andy Hughes came back to life, he hadn't really been shot.............it had all just been a dream.
Surely the public wouldn't stand for a whole football match based on a dream.

Last night i met some very lovely folk, all football bloggers, at the Socrates meet up at Victoria. Amongst chatting football, plenty of beer was consumed. The place ran out of bitter by the end of the evening.
A great evening was had as i met up with friends i 'speak' to on twitter on a daily basis, but beer makes me dream in a similar way that cheese affects most people.

We really did play at Forest today, it was shown live in both Finland and Kuwait i believe, but that's where the similarity ends.
It could have been more if Johnnie Jackson and Ben Hamer had you fooled with their cunning hoax on twitter about the signing of Heskey.

I watched the game through a stream found on line but i fear it wasn't the best one available. Whenever we attacked the Forest goal it either froze or threw up big adverts which didn't really want you to close them. Being the high quality product that it is, it's kind of hard to complain isn't it so i battled through bravely.

Forest were much the better side in the first half and went into the interval in a deserved lead. Dale Stephens was a noticeable absentee from the team, perhaps he was still in the general area of Villa Park, so Jordan Cook got his first Charlton start.

The Londoners got much more into the game in the second half but it was always going to be an uphill struggle. Johnnie Jackson worryingly seemed to be a little out classed, whilst Bradley Wright-Phillips hardly got a kick at all.
Forest are undoubtedly a quality team, Simon Cox and Dexter Blackstock both looking impressive. Where Jackson looked he may be a little out of his depth, Cox seemed far too assured to be playing in this division.

Forest got their inevitable second goal to seal the victory, at which point some Charlton supporters decided to beat the rush and depart. Little did they know a mini comeback was around the corner.

Ricardo Fuller and Salim Kerkar both came on with a view to giving us an extra little spark up front. And that's exactly what happened.
Charlton pulled a goal back when Fuller headed the ball against the post which then came off the keeper before ending up in the net. A debut goal it wasn't though as it will be recorded for all time as an own goal.

There were three minutes left, Charlton suddenly seemed to have some purpose. Two minutes later the two substitutes linked up again for Kerkar to strike a powerful volley in the box, only for it to hit an unsuspecting defender. There were penalty shouts for a hand ball but in fairness the Forest lad had little chance to move, it was almost point blank range.

Five minutes of stoppage time, mostly for a battered Kermorgant, lengthened our hope for an equaliser, the best chance falling to Jackson.
A free kick well within his range, if it had been against a Sheffield club it was sure fire to go in but not, alas, today.

Our first defeat, a little reality check, but still a promising start to the campaign. It's a week off now due to the international break, I'll be making the most of it with a good old fashioned booze cruise next Saturday to France. Then it's the big one, Palace at home.

Posted by algordon_cafc at 8:07 PM