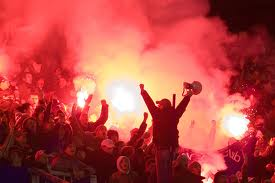 I don't really have a problem with football 'ultras', a familiar sight all over Eastern Europe and particularly in Italy they bring a lot of noise and colour to a football match. I do rather enjoy seeing lots of coloured smoke emerging from a football crowd.
Unlike football hooligan firms, ultras do find more importance in supporting their own side rather than fighting the opponents. The need for black ninja outfits is slightly worrying though, maybe they'd feel more at home in certain religious female attire?

Crystal Palace included a small amount of ultras in their 3000 strong travelling support and in all honesty, the noise from the Jimmy Seed last night was very impressive. Dislike them i may, but i can't ignore the fact they certainly were a sight and did the whole twelfth man thing perfectly.

While the smoke was getting in the eyes of the travelling contingent, it was certainly clearing in the home areas. We may have had a scoreline at Forest that tried to cover the deficiencies in the side, but the Palace game certainly showed us all our shortcomings and raised even more questions.

The honeymoon period of the Birmingham and Leicester matches when we still carried the momentum of last season are well behind us now and we can expect a long hard slog through the coming winter months.
Crystal Palace were by no means a side on par with Forest but they were physically strong and well organized. Two factors we need to sharpen up on.

At the time i felt this was probably the easiest three points they would win all season, now having had the chance to sleep on it, i can take a couple of positives from the evening.
It seems the midfield is everybody's main concern. Dale Stephens is back and needs to continue with the performances which alerted Villa in the first place, using us as a platform to both better himself and launch what could be a fantastic career. If not and he wallows in what might of been he could take the team morale down with him.

One thing we can take from last night is the need to play with width. Jackson is struggling with fitness and doesn't look to have a full ninety minutes in him, whilst Pritchard doesn't really seem the player to attack full backs and get the crosses in. Danny Green came on for a cameo yesterday and suddenly showed a creative spark we had been lacking.
Look at the trouble we had dealing with Yannick Bolasie. A true wide man, Chris Solly was tested to the full, first on our right, then once Wiggins had gone off on our left. It's testament to young Solly that he limited Bolasie as much as he did.
Zaha also proved a handful, never short of both ideas and confidence, he was a constant thorn in our side all evening.

Palace were famed for their inability to defend set plays. Unfortunately both Jackson and Kermorgant struggled to find a strike between them that would really hit the target, let alone trouble Speroni in goal. Shots on target were in short supply throughout.

Our disallowed goal from Wright-Phillips should have stood after seeing TV replays, the referee later apologizing to Chris Powell for the error of judgement, and that goal would have had some impact on confidence and perhaps the run of play, yet we were clearly second best.

A draw would, i hate to admit, have been unfair on the visitors. The little rally late on which saw some awful shooting from Fuller and Wilson amongst others was I'm afraid too little too late. Again, similar to the Forest match it was desperation to salvage something after being outplayed for seventy minutes.

Ben Hamer had one of the best chances as he came up for a stoppage time corner. A strong header was cleared off the line and we got a comical moment to cherish as the keeper tried an overhead kick on the follow up. That little gem was especially for the Addicks that had already seen enough and headed for the pub.

Quote of the night from a chap i spoke to afterwards, "We looked like a League One side who's financial backer had pulled out."
It's back to the drawing board for the gaffer after this wake up call, bouncing back against Derby on Tuesday is vital if we don't want to get too comfortable in the bottom six.

For the first time in many years i rode to the game last night. I parked the bike at the Rose of Denmark heading back there afterwards for a quick one before setting off home. In hindsight this didn't turn out to be a bad idea. It was nice to wind down and chat about the game afterwards but it also kept me away from Charlton station.
When i returned home i saw my twitter timeline full of people saying that it had all kicked off earlier around the station. Men old enough to know much better unable to differentiate between fun harmless banter and ignorant thuggery.

What a sad way to end a hugely disappointing evening.
Posted by algordon_cafc at 5:22 PM