We're on a mission from God! 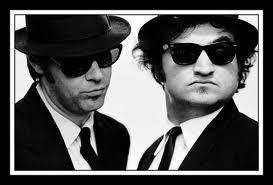 I've been off the radar this weekend. I briefly followed the first hour of Saturday's game but then didn't know the result until around eight o'clock last night. The only football I've seen is four minutes of our highlights on the wonder that is CAFC player.
I have concluded though that i was the only Addick having a dose of the blues yesterday.

My mother in law was hosting a Blues Brothers themed party to celebrate her 50th birthday, i needed no encouragement to don the black tie and trilby hat, and being family we had to be there early to get everything set up, hence missing the end of the second half.

Needless to say, a good night was had by all. I was allowed to dance as, according to my wife, my rather bizarre efforts on the dance floor are very in keeping with those of Jake and Elwood Blues. A little beer intake also gave me the encouragement to show the younger participants a thing or two on a stage that i would never normally call myself comfortable on.

Today after church we were back there putting everything straight again, washing the blood off the floors (might have been chocolate cake actually), and turning their abode into somewhere a little more livable. Even the Sunday afternoon football has passed me by, as i said - off the radar.

The blues i was relishing in were far removed from the blues Ipswich are languishing in. Plenty of boos greeted the team and their boss at the final whistle, how easily that could have been us if we hadn't got a result yesterday. The Tractor boys remain firmly rooted in the bottom three. We now have six below us! Paul Jewell may well be worth putting a couple of quid on for the next managerial casualty.

I must congratulate the traveling supporters who made it to Portman Road. A great football ground I've only ever been to the once (for a certain play off semi final), many fans had to endure a bus replacement service for large parts of the journey. On the back of three defeats this shows wonderful dedication.

As it is, Chris Powell changed it around, albeit enforced in places, with Ricardo Fuller getting a start in place of Kermorgant, and Hollands being relegated to the bench. Jackson who has struggled on the left moved to a more central position allowing an impressive Salim Kerkar to start.

This worked to great effect at the start of the second as Kerkar crossed for Jackson to score a wonderful poachers goal, followed three minutes later as Fuller fired home after some fine solo work.

Ipswich pulled a goal back from Jason Scotland which took a huge deflection wrong footing Hamer in the Charlton goal, and it could have been a real role reversal with Charlton not all out attacking for the last twenty but instead defending in numbers.
The Addicks didn't just sit back and soak it up though as they had chances to put the game beyond reach, but 2-1 it stayed giving a rather relieved Chris Powell and his team three points and a first away win of the season.

Sometimes an enforced change can inadvertently turn things around for you. I've a decision in my own work life which I'd put off for far too long and has now been resolved for me due to a change of  circumstance. It's no good looking back and wishing it had all happened a little earlier, but rather to be thankful of good fortune, and to embrace and build on it.

Blackburn Rovers come to The Valley on Saturday. Big fish in this pond they may be, but that just gives us more to aim for.

Posted by algordon_cafc at 6:20 PM