Only Charlton could park the bus on a double yellow 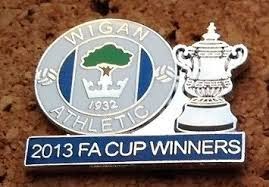 It could have been a great day for football. The new look Charlton, full of fresh faces and tongue twisting names headed north to Wigan in an effort to kick start our season whilst I, stuck down south, had a choice of either Sutton United or Horley Town to visit thus quenching my thirst for some non league football.

Torrential rain last night soon put paid to any hopes I entertained for some live action, not for the first time this year meaning radio commentary from the DW Stadium would have to suffice; three minutes in I was almost convinced I'd had the best decision made for me.

It was an exciting and brave looking starting eleven, if not expected or conformist. Diego Poyet made a well earned debut alongside keeper Yohann Thuram-Ulien, full back Loïc Négo and striker Reza Ghoochannejhad. It would be none of these that would grab the headlines mind, more so a certain striker that I believe scored his first goal in thirteen outings today, Marvin Sodall.

I'm not his biggest fan as you know, but I was as happy as anybody when he put the Addicks in front right at the start of the match.Skipper Johnnie Jackson split the defence open and put through Sodall who coolly finished to give the travelling supporters fresh hope after the huge disappointment of transfer deadline day.

Moments later Rhoys Wiggins' afternoon came to an abrupt end after a collision so another youngster, Harry Lennon was called upon to play a large part of the game.

Charlton had a great chance to double their lead when Reza Ghoochannejhad's volley hit the crossbar. The Iranian pleasing club shop staff and parents alike by choosing to have his Christian name above the number eight on the back of his shirt.

We know all about nail biting closing moments at Charlton, but does any other club drag that anxiety out for over twenty minutes with such regularity? Never good at defending a single goal lead Charlton 'parked the bus' very early in the second half, bolstered by two defensive substitutions from Chris Powell and then tried tried to soak up unbelievable pressure from the home side. The chronic strain on our goal was always going to reap reward but it happened twice in the last two minutes to snatch a rather deserved bounty from the visitors. Firstly as they followed our lead and carved through our defence, then shortly afterwards showing the need for a free kick specialist as they converted the direct set play.

Those in attendance blamed the tactics and the substitutions, those listening on the radio did the same. It's not as if it's the first time Powell has been chastised for his poor use of the bench. Now I'm still right behind our manager, I still believe he's got what it takes to pull us out of this grievous position and save our season, but then I'm biased and I feel like I know the man as a close friend.

It begs the question, if it wasn't Powell, or more chiefly a Charlton legend at the helm would we be so understanding and so patient? Certainly if it was someone of Alan Pardew's ilk, we'd be stood outside The Valley with placards by now demanding the board address the situation before we finally sink without trace. How does our Roland view Chris Powell? Not with the same love and loyalty as sixteen odd thousand supporters, that's for certain. He'd definately be aware of the history, but he won't know Powell like we do, to Roland Chris Powell may just appear as a better dressed version of Iain Dowie. Add that we've heard the deep respect doesn't seem to flow the other way either and the term 'pressure cooker' springs to mind.

The Belgian may have seen some cup success but he's witnessed three out of three league defeats since acquiring the business. Next Saturday's visit of Birmingham may be vital to the club for more than one reason, providing of course that our pitch is somewhere near playable. Has anyone thought to look at it over the past two weeks?

On the bright side, every week something somewhere in the footballing world never fails to put a smile on our despondent faces. As Russell Howard would say, it's not all doom and gloom. Today, making his Barnsley debut, Emmanuel Frimpong lasted just thirty minutes before picking up his second yellow and getting his marching orders. I don't think I've enjoyed a footballers misfortune so much since the days of Tomas Brolin.

Kermorgant pictured this afternoon in his Bournemouth shirt, a disastrous two minutes in Wigan, I said a week ago that dark days lay ahead, I didn't expect two of them to come in such quick succession.