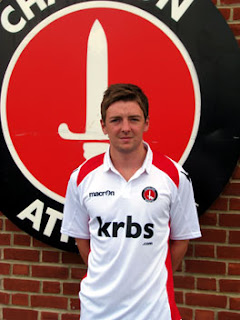 Nothing to do with ladies undergarments of course, but Danny and Dale, Charlton's two new signings today. We, of course, all knew the lads were putting pen to paper yesterday, the club however seem the last to tell people. When they do break their silence, they always drop us a little bombshell as well! Today it was the first pictures of the new away shirt.

Pictured above is Dale Stephens ( not Dale Jennings as Sky Sports may have suggested), a 22 year old central midfielder signed from Oldham Athletic. Danny Green we know a little more about. A schoolboy at Charlton, he was let go by the club and went to Northampton then later to Nottingham Forest. Green failed to break into the first team at either of these and ended up playing Conference South football at Bishops Stortford. It was here that Dagenham and Redbridge spotted the winger and signed him on a free transfer. As Charlton supporters, we know exactly what Danny is capable of, scoring against us in both fixtures last season. I'm sure Benno is looking forward to having his old team mate linking up with him again!

Unlike the previous bout of intakes at the club, today money changed hands. Both players signed three year contracts for undisclosed fees. What does this mean? Numbers have been banded about on Twitter, both of which seem about the going rate. Why do these fees have to be secret?, I'm sure this never used to be the case a few years back. Any answers would be greatly appreciated as I'd love to know the answer!

Tomorrow sees the squad report back after the summer break for their first day of training. I hope Chris Powell has made up name badges for them all. I wonder if they all have to stand up in front of each other and introduce themselves? Personally, i hope they wear squad shirts with names for the pre season games, otherwise none of us are going to have a clue who is who with so many new faces!

So Macron have produced a new away shirt for us. It has a real polo shirt look to it, which in itself isn't a bad thing. It does remind me more of a casual item of clothing though, more suited to promotional/charity type events the players might attend. Don't think i don't like it, it's definitely growing on me. It's just that with Wimbledon on at the moment, i wonder if Macron are aware what sport The Addicks actually play........
Posted by algordon_cafc at 6:58 PM