I pondered for a while on whether to write this post or leave it for a while. The day after i published the last one, we signed another player. That was Thursday. Friday, yep you guessed it another! I figured that being the weekend, no business will be done and I'd have an opportunity to catch up.

Rhoys Wiggins is a left sided full back signed from Bournemouth. Much to the disgust of The Cherries fans, who feel there may be an aspect of 'moneygrabbing' in the mix, we signed another star from their play off hero's. We weren't the only ones interested in the young Welsh under 21 international, Championship high-flyer's Watford were keen for his signature. I suppose it's something to be excited about that he chose to sign a three year contract (again for an undisclosed fee) with The Addicks.
I, like many others, thought Evina was going to be the first choice at left back (with exception to Youga of course), but Chris Powell did say the young lad loves pushing forward. Competition for Johnnie Jackson then, young Callum Harriott's going to have his work cut out to break into the side!

Friday we saw the capture of Matt Taylor on a free transfer. The former Exeter City defender was much loved and had a real hero status at the club. According to Joe Hellier an Exeter fan (worth following on Twitter guys) who plays a big part on Grecian Player, Matt is a Terry Butcher type of defender who would play through a broken leg. My first thought was our own Sweaty, Stuart Balmer. A real favourite ex player of mine who certainly wore his heart on his sleeve. 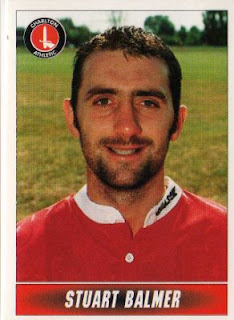 It turns out Taylor does have a dodgy 'Cilla' so we may not see the very best of the defender week in week out. We're used to that though, what with big Joe Anyinsah last season.
It's nice to see a central defender signed however, especially as Llera was one of the notable absentees when the club returned to training this week.

Someone who might wish he was reporting to Sparrows Lane is Jason Euell. I read an article in the week, an interview with the unattached former Charlton front man, which stated he would seriously consider a return if the club approached with the right terms. I'm going to get shot down in flames here, but i don't think we need him. I don't see it as a forward move. In fact, i was never overly struck on him first time round. I can already feel those daggers! I feel it would be a large wage for very little return. Yes he's got plenty of experience for the dressing room and would be an inspiration for the younger members of the squad, but so did Christian Dailly. That didn't really help in our on pitch confidence last season. If it's experience we need, look at the management team. Chris Powell played for England, there's nothing he can't tell the youngsters. And Paul Hart has an exceptional reputation. A good squad is coming together, let's look and concentrate on the future rather than still clasping to 'the good old days'.

This blog is very much a Charlton blog, but not just a Charlton blog. Things that occur in my day to day life may well get a mention or complete post. This is the same with many blogs written by Addicks. It's an on-line diary which we like others to read. I was saddened to hear this week though about comments left on a friends page. I'm not mentioning names or articles, suffice to say, it was a post about something he loves that plays a big part of his everyday life. If it was a racist or illegal type of post, i could maybe understand it, but it wasn't. Just something that has great bearing on his present and future. We do have freedom of speech and that is something so many others strive for. If you don't like what you read, close the page. Simple. Don't leave arrogant, uneducated or rude comments, no-one wants to read them. There is enough of that kind of rubbish on sites like You Tube (ever looked at the comments?, don't bother) and a certain football club forum.
Happy reading folks.
Posted by algordon_cafc at 9:16 PM