Well in at the weekend. 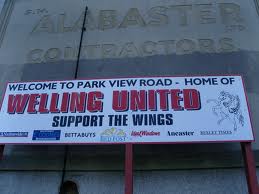 The first opportunity for many Addicks to see their new signings happened on Saturday afternoon at the traditional pre-season opener at Welling.
It's a game that i haven't in all honesty been able to attend for a good few years now. Never though have i known this fixture to be viewed with so much anticipation.

Prior to all this excitement however on Friday, Charlton announced yet another signing. Now we could in theory field a completly brand new side with the number of new signings now well into double figures! As Jose Semedo went north, Michael Morrison came south.
Morrison came here after a very disappointing time with the Yorkshire club. Starting his career and coming through the youth ranks at Cambridge United, he moved upwards and onwards in 2008 with a move to Leicester City. It was here with The Foxes that he first came to meet Chris Powell. Powell obviously felt that Morrison's unhappy time with The Owls was very out of character and therefore another three year contract was offered by the club. As seems the norm these days, the fee was once again undisclosed.

I have to wait a couple of weeks until the trip to Woking before i can watch the lads for the first time myself. Thanks to one very popular chap at the moment, i along with many others got the chance to watch twelve minutes of yesterday's action with my own eyes.

Once again a bumper crowd of over two thousand fans made a day out of it. The majority with a couple of beers to the good, had to play a game of guess the player as team sheets were rare and names missing from the shirts. Now, with only a week of training under their belts, you are never going to see football to set the world on fire in this encounter. We do however get a glimpse of what is to come. Danny Green i feel has won over the Charlton support already with his forty five second half minute display. Chris Powell fielded as expected, two different sides. The first half side was skippered by Johnnie Jackson, nice to see him wearing the red shirt again after the injury of last season. Doherty wore the armband for the second period. The two Charlton sides were, in full

With eleven new signings to choose from, i don't think anyone would have guessed the first goalscorer to be A. Trialist. Sam Williams released by Yeovil, on trial in SE7, it was though to break the deadlock ten minutes into the second half. Morrison made it two on his second day at the club, then Green finished it off with a screamer to get an early goal of the season contender in. All this on his birthday!

So the boys flew out to Spain today for some time in the sun. Bristol City and Cardiff are the opponents in Seville. A handful of supporters will time their holidays to coincide with this. Of them i am jealous, although when i heard a trip to Spain was on the cards i did expect the opposition to be local sides. I doubt twitter will be quite so full of match updates as it was yesterday!

Why wasn't i at Welling then? Well, i had to work till not long before kick off, then in support of my mother in law i went to Heidi's parents church. There was a talk conducted by Philip Bell of creation ministries. A very informed presentation discussing the creation/evolution argument and studying the facts and hard evidence with a good scientific approach. This is something Heidi's mum feels very strongly about and she had worked hard to get Philip to their church. As much as i love my football and my Charlton, i have to put my family and more importantly my God first.
Posted by algordon_cafc at 11:24 PM