A Friendly Day Out

I love pre season friendlies. A chance to see new signings mixing it with the old favourites, and that's just on the terraces! Everything about a day out with nothing resting on it is enjoyable.
Today was a prime example. 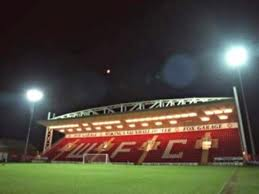 Woking is a little town near Guildford and only about a forty minute ride on my motorcycle from home. The chance to get out of work on time and get my first glimpse of the side this season was too great to pass up. So, i did get out on time, that doesn't happen often, and already I'm expecting too much too soon. Quick change out of the overalls, run to the bike and press the starter button, click, nothing more. Flat battery. Here we go, a mad run around looking for jump leads and van keys. Hey presto, it's running and the journey to Woking will put enough 'juice' back into the battery for the return leg.
Knowing a few of the CAFC twitter crowd are meeting for a pre match pint, Time is of the essence. I did better than expected for at two o'clock i roll into the Kingfield Stadium car park. The beauty of the bike is being allowed to park where most can't, in this case right next to the turnstiles!
A very friendly steward made sure i was OK and gave me directions to everywhere i could possibly want before I'd even paid my entrance money. Eight pounds didn't seem too bad, especially when i hear that Crawley charged seventeen for a game against a Chelsea XI last week!

First stop the bar. A very nice pint of London Pride even if it was on a tap, in a real glass! I'd forgotten what the non league clubhouse was like.  Sutton United was the last one I'd been in and that was a few years back now. Upstairs were the loos and we had to be careful not to splash on the carpet. This really is a different world to The Valley.

One thing i love about these days, other than being able to stand, is the non segregation and the great banter. The Woking fans in the clubhouse were very welcoming and a real credit to their club. In fact everybody from the lady selling programmes to the staff in the burger van were happy to see us and polite and courteous. Unfortunately a pie from a kiosk in the covered end doesn't come with that kind of smile.

As for the football, well it was goalless and a little flat at times, especially the second half. This was definitely Chris Powell's second string, the starting line up was ( i think) Sullivan; Francis, Mambo, Doherty, Andersen; Wagstaff, Stephens, Pritchard, Davisson; Popo, Hayes. I was just happy to have Mambo number 5. If only there was a song fitting for that scenario.
In all honesty it's thanks to a certain Mr Liam Happe that we knew who we were watching. Thanks for tweeting the line up fella!
The Doc did OK, Francis looked one of our best, but the shining performance of the day went to the Woking keeper. I think the phrase I'm looking for is 'played out of his skin'.
A couple of changes came throughout the second half. The young French trialist Alexis Honore will probably be remembered more for his lilac boots than his efforts on the field of play. Callum Harriott who looked promising towards the end of last season got a run out, but the cheer of the day was to see Jason Euell pull on a Charlton shirt again. He got around fifteen minutes to entertain us, I'm not reading too much into it though. It's good for his fitness and keeps his eye in as it were.

Nothing to write home about then, but once again it's the first ninety minutes most of these lads have had. The majority of today's participants will be squad rotation players at best, last resorts at worst. There were little glimmers though that show why the gaffer has faith in them. I'll be interested to see how many of them feature on Tuesday night at The Valley as opposed to running out at Bromley the following day.

One last shout out is to the very kind Woking supporter who came to my rescue with jump leads so i could ride home. A 1400cc motorbike is as heavy as a small car, not the easiest thing to push for a bump start. The Charlton team coach had pulled in and things were looking like I'd be hitching a lift back from them before this particular kind gent showed his face. A new battery will be bought Monday!
I'll sleep well tonight and dream of what could have been. Jason Euell and Chrissy Powell giving me a push start. I'm sure they would have delegated it out to the lad in the lilac boots though.
Posted by algordon_cafc at 8:49 PM