Charlton are off in Spain enjoying some team bonding and the sunshine. More of that at a later date. Back here, just a mile from Gatwick airport, life gets more chaotic by the day.

It started with our roof. One chimney was taken down earlier in the year as it was unsafe. Then we got squirrels making a home for themselves in the loft. I went on a stakeout up there with an ex-serviceman friend and 'dealt' with those little fellows.
So we needed the builders to fix the hole that the squirrels made to get in, and also block the other chimney as birds have nested in it and frequently fall down the thing two floors, requiring us to rescue them.
Upon inspection, this second (and thankfully final) stack was a little (lot) on the wobbly side. One strong gust of wind they said and.....................doesn't bear thinking about.

So up went the scaffold in a passageway all of three foot across, between our building and the empty derelict one next door.
Now if you're removing bricks you'll have to remove them and dump them somewhere. Or just throw them down a large hole that's staring you straight in the face. Great in theory, disastrous in real life. With every brick that would block Santa's path came dust clouds, pouring out of every crack in our ageing walls. The motorcycle shop downstairs had a good centimetre of dust over everything when i opened up that morning.
Change of plan then. Meanwhile the demolition men turned up next door to start pulling down the six empty shop units with flats above that have been uninhabited for a much longer time than our stay outside the Premier League.
With roof tiles flying in every direction, the race was on. Our builders needed to finish putting up before next doors team of workmen pulled down as otherwise there would be nothing supporting the scaffold.

I'll point out that during all of this, we had a visit from a gas board engineer. Turns out a new gas main is being laid in our road very soon. This will not be compatible with the existing pipework to the building, so therefore all our pipes need to be replaced first. If it wasn't for the fact my home and place of work would both vanish, i was tempted by this point to maybe just ask the demolition team next door not to stop when they got to us.
They don't seem to be the sharpest pencils in the box though, they may not yet need my prompting!
With no regard to anybody else's safety, and even less for their own, i had no choice but to complain to health and safety. Bits of roof were falling onto the pavement below which was not closed to the public. In fact, at around half past three we get a good hundred or so school kids walk past on their way home from the local secondary school.
Men with clipboards did turn up and things seem to have improved but the game they play of smashing asbestos into tiny pieces with a pick axe still gets played daily!

More disaster. Our two builders had finished their work on the roof and got an emergency bit of plumbing work thrown into the bargain as well. Apparently the washing up water from my kitchen sink had ended up on a rail of brand new motorcycle clothing directly below.
Then the bombshell. Whilst clearing the rubble which didn't go down the chimney off the scaffold, a brick struck one of them on the head. This knocked him out cold and a trip to hospital became a necessity. Fractured skull and internal bleeding they said, he's going nowhere fast.
My lunch break today consisted of standing in for the wounded and helping clear up the debris. Jack of all trades me. 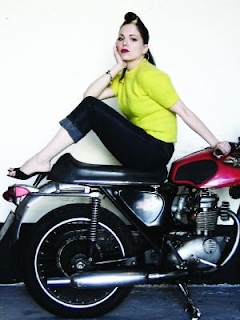 I have though had some opportunity this week to escape the dramas. Monday was Heidi's birthday so a weekend of festivities were had.
This culminated in a quite 'just the two of us' evening on the day itself. A romantic meal at the local curry house was followed by a film and a drink back at home. I won't bore you all with the soppy stuff but i will recommend the DVD.

Wild Target is a British film with Bill Nighy and Emily Blunt. Hilarious, slightly dark humour but funny nonetheless although a little odd. Very much my cup of tea. As was the musical score accompanying it. The main song for the opening and closing credits is Mayhem by Imelda May.
Now, Psychobilly is very much my kind of style. Rockabilly not so much. Jools Holland loves this girl and her band though and on this evidence i can see why.

I bought the album 'Mayhem' on iTunes for under a fiver and have enjoyed it all week. It has the uptempo delights of the title track, and the first single off the album 'Psycho', to the relaxing and very bluesy Kentish Town Waltz. Add to this a wonderful cover of Gloria Jones (not Marc Almond's) Tainted Love and a bonus track of Johnny Got A Boom Boom, a highlight off her first album, that will definitely get your foot a tappin'.

It's a real joy, albeit a departure from my norm, and has given me moments of escapism and peace from the chaos and disorder of everything outside my front door.
Posted by algordon_cafc at 8:06 PM