After the friendlies against Woking and Den Bosch, you'd be forgiven for thinking we had a tight defence and goal shy strikers this season. Now, just four days later the Addicks have shown that you couldn't be further from the truth. 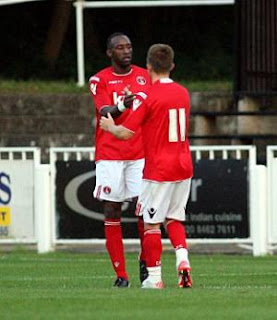 After the glitzy high profile game the night before against the Dutch, Wednesday was a chance for those not involved to continue their build up. A squad similar to the one we saw at Woking.
Jason Euell did get to start at Hayes Lane, and once again the chance to pull on a red shirt after settling for the blue effort the previous Saturday. And how he enjoyed it, scoring the opening goal on the half hour stage.
Francis, Mambo number 5 and Ginger Pele, all got starts alongside some of the youngsters in the likes of Evina, Bover and Pritchard. One notable change for the second period was the introduction of our Spanish star turn, Alonso.
In the second half, substitute Popo scored his first senior goal for the club and Charlton were at this point comfortable for the win. Callum Harriott made it three and then youngster Ade Azeez wrapped it up. Four goals against a near full strength Bromley side isn't a bad evenings work in anybody's book.

And so into the lions den. Millwall against Charlton doesn't sound particularly friendly however you dress it up. A good run out and a strong test to see how equipped we are for next weekend it is though.
Today was a testimonial match for Millwall's Alan Dunne. Dunne has been at the club for twenty years , ten of which as a member of the first team squad. With over two hundred appearances for the Lions, a financial bonus was hugely deserved reward for the Irishman.

Chris Powell named a strong eleven which looks likely to be next Saturday's starting line up too.
Elliot is for the time being the gaffers first choice in goal. Solly and Wiggins flanked Taylor and Morrison in front of our number one. Once again the very impressive Stephens and Hollands were given the role of bossing the middle of the park, with Jackson and Waggy as wide men. BWP and Hayes lined up in front. I think this will be the bosses preferred partnership up front. Paul Benson may well end up with the role of super sub for the first part of the season at least. 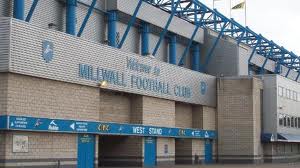 Things couldn't of started any brighter for Charlton with Bradley Wright-Phillips getting us off the mark at the toolbox after only five minutes. The first of two lovely free kicks pulled the home side level ten minutes later, only for our top scoring striker to beat the Millwall defence and strike low into the net. By half time however, Millwall had found the net twice and gone in 3-2 up.
Johnnie Jackson levelled things with fifteen to go with great positioning and an equally great header. Former Addick Hameur Bouazza broke Charlton hearts though with a winner five minutes later. A very soft free kick was given after a challenge from Morrison. A beautiful delivery from Bouazza found the top corner.
Chris Solly fired over in the dying moments, but 4-3 to the home side it remained. Eleven goals in two matches then.

It is still a game where the result doesn't really matter. other than bragging rights on Monday morning at plenty of workplaces that is.
Is this Charlton team ready for the big kick off?
Robbie Elliot as i said before is Chris Powell's first choice between the sticks. He may not be top drawer, but he does have a passion for the club and isn't a bad keeper at THIS level of football we're playing at. With Sullivan pushing hard for his place, i can only see competition as a good thing for the pair of them.

The central defensive pairing is one i always see as so important. We've given so many goals away through defensive mistakes in front of goal. I don't think we've yet got another Youds and Rufus just yet though. Taylor and Morrison are both big lads who are good in the air. They both lack pace and i fear could the two of them could be prone to an occasional lack of concentration or communication. Chris Solly always gives his all and made a welcomed return to the side late last season. Our other full back Rhoys Wiggins shows moments of talent, but does again look like he could be a weak link in the chain. His last two appearances haven't been the strongest. The jury at the moment is still out on our young Welsh left back.

Last season's midfield was without doubt a problem area. Chris Powell was quick to address this. Danny Hollands and Dale Stephens look fantastic additions. Against, on paper, superior opposition they have both shone and run the game at times. They could well become the best central midfield partnership in League One this season, i really am that impressed. As i am with Danny Green. These three have been the highlight of pre season, add Johnnie Jackson into the equation and a forward flowing midfield is made. The one tiny question mark is their defensive duties. With an area behind them that could be quite fragile, i have a feeling they may at times get caught pushing forward too often. Midfielders are sometimes defenders too. Our back four may at times need all the help they can get.

Bradley Wright-Phillips is a twenty goal a season striker. That is in no doubt. He is however a poacher and needs someone to play off. Paul Benson we know can do it at this level and will enjoy the inch perfect crosses he receives from Green. Paul Hayes is a journeyman striker who hasn't been on top of game for a while. He'll be hoping to put a poor season in the Championship behind him, and to his credit has improved as the games have come and gone.

There are of course the likes of Alonso, Evina, Wagstaff and Bover to throw into the equation. In places, the squad has quality in depth. In other parts it's a little low. League One football don't forget isn't a rich place for any team. No side is going to have a huge squad and if Chris Powell does bring another couple in we will be, unlike many,  in a very strong position.
It's been a great pre season, I'm certainly ready for the real thing to start. And on the whole i think the football team is too.