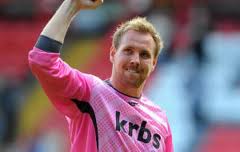 Never has a pink jersey been so coveted. As we stand at the moment, three goalkeepers will be keen to wear it this coming Saturday.
Robbie Elliot and John Sullivan have been joined by Ben Hamer from Reading, with yet another 'standard issue' three year and undisclosed fee deal. Brentford and Exeter both had the pleasure of the 23 year old's efforts last season so he's no stranger to League One. Obviously he has invaluable experience of playing alongside Matt Taylor at Exeter, not to mention playing in front of a nearly full Valley when he visited with the Grecians for our football for a fiver campaign last term.
This does bring about the question of Elliot's future in SE7. I think three first team keepers is great competition but i don't think one of them not even making the bench come matchday (or two not making it if Chris Powell feels brave enough with this new ruling) is going to prove popular with any of them, no matter how many promises of 'keep training hard and your chance will come' they receive.
This of course points to Elliot's well rumoured departure. Chris Powell has already said that he won't let our Addick's supporting number one go on a free next summer when his contract is up for renewal. So to sell him now while he commands a fee seems obvious. Does hint at a move doesn't it.
With all respect to the lad, he did say on Twitter last night that he has no idea about any move and would love to stay here. There is no question that, should his future lie elsewhere, he'll always be one of us.

Chris Powell was true to his word when he said more signings are immanent. As he proved by snapping up Andy Hughes from Scunthorpe on a free today as well. The much travelled and experienced midfielder who has signed a two year deal at Charlton, will bring a lot to the dressing room and the training field.With around 500 senior appearances to his name, the 33 year old will prove a very useful utility man to have around the first team. Although mainly a midfielder, he can slot nicely in at full back when required. I do believe that makes it fifteen and counting.

So as the big kick off approaches, everything seems to be slotting into place. Last night saw the opening edition of this season's Charlton Live show on the CAFC player. The usual level of seriousness and professionalism was quickly reached and once again I'm sure the 'bloopers' box is already overflowing.
It did for me signal the start to this much anticipated season. A fantastic interview with the gaffer, Chrissy Powell, plus a superb insight into the squad from Johnnie Jackson with a little help from Danny Green. If you don't yet subscribe to CAFC player, then may i suggest you do. Seven till nine on a Sunday evening is worth the money on it's own.And no, I'm getting paid to say this before you ask! After last night Chris Solly will always be Rigsby to me. Now, if i can write a new song for him starting with the words Miss Jones............
Posted by algordon_cafc at 1:53 PM