Maybe it's because i'm a Londoner 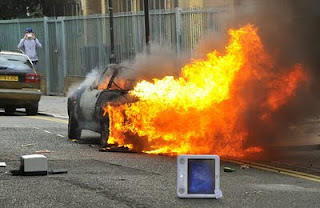 Tonight's Carling cup game has been postponed as have the ties at West Ham and Crystal Palace. It was also announced this morning that England's friendly against the Dutch tomorrow at Wembley has become another casualty.
Unless you've been on the moon this week, you'll know it's to do with the rioting across London and other major cities.

I may not live in the capital anymore but I'm a Londoner by birth and always will be proud to come from the greatest city on earth.
I've spent years defending football supporters to those who tar all with the same brush, despite hooligans trying their hardest to prove me wrong. Now i find myself defending London as a whole, even though it's the smallest of small percentages that have brought us to the attention of the world this morning.
What a great advert for the capital a year before we want the world to visit us for a major sporting event.

I've seen interviews like the rest of you with shopkeepers and residents who have had their livelihoods and their homes wrecked, not to mention what this is doing to an already fragile economy.
There is absolutely no excuse. Any political reasons from the first riot in Tottenham have long since been forgotten. This is just mindless violence which i think has been on the cards for a very long time.
I'm not at all surprised to hear that someone has ultimately died through these events.

A generation has grown up with no respect for authority. That isn't just the police but teachers at the schools and colleges, and also parents at home.
We live in a world where children can sue their parents! Nobody can lift a finger to these yobs for fear of getting prosecuted and losing their jobs.
I've heard people say the kids don't feel like there is anything for them in this society and it's their anger being vented. I know there are many more decent kids who also find it hard in their search for work and have troubles at home who don't go out to ruin other people's lives.

I'm not going to get too far into politics, I've heard far too much rubbish on the news already. To me it's simple. Ephesians 6,1-4.

Children, obey your parents because you belong to the Lord, for this is the right thing to do.  “Honor your father and mother.” This is the first commandment with a promise:  If you honor your father and mother, “things will go well for you, and you will have a long life on the earth.”   Fathers, do not provoke your children to anger by the way you treat them. Rather, bring them up with the discipline and instruction that comes from the Lord.

This has been such a sad few days and has left me feeling both upset and angry. I take my hat off to all those out there at night trying to contain it and the local residents out there today cleaning up the debris.
The Carling cup will just have to wait for now. It is after all just a game of football

Posted by algordon_cafc at 1:55 PM