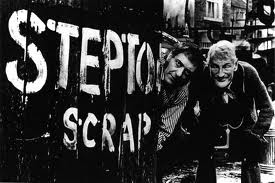 That was the shout of the Rag and Bone man who was after your discarded and unwanted odds and sods that he could still salvage. Scunthorpe, The Iron, filled that role yesterday taking a point (albeit more than deserved) that we discarded.

A quality side will get result even when they haven't always had the best of the match. Charlton have had plenty of warning already at this early stage of the season, first halves have been dominant only to let the opposition back in a little in the second forty five. It was only a matter of time before somebody punished us.
Scunthorpe stepped up to that challenge after some very sloppy defending gave us our first glimpse of disappointment.

Johnnie Jackson opened the scoring with what is becoming a trademark looping header. This was followed by Bradley Wright-Phillips getting on the end of an inch perfect cross from Danny Hollands. 2-0 and controlling a game we had little right to. Scunthorpe had the more possession, the more shots on and off target and six corners to each one of ours.
The visitors never laid down and got themselves back into the match through Bobby Grant. A goal with around a quarter of an hour to go, then in the first of five added minutes the marksman doubled his tally to break Charlton hearts.
Watching these goals on TV highlighted that the striker was surrounded by red shirts on both occasions, yet twice allowed a route through to goal.

This result was inevitable, every team every season will drop points. Four wins on the trot was asking a lot to open a season with. It's how we bounce back from this and what we'll take from it that matters. Last season we went from match to match making similar, if not the same, mistakes. We've an opportunity on Tuesday to take a scalp, if you can call Reading that, and get back into winning ways, it was a habit that suited us.

Chris Powell has stuck with the same side so far, i hope (and expect) the Carling Cup will give others from our large squad a chance, and the opportunity, to stake a claim in the starting XI for the trip to Bury next Saturday.
Bury have started well, but these are the teams we need to send a lesson out to. MK Dons and Brentford both walloped their opposition yesterday, the former likely to be promotion candidates come May. We have only dropped the first two points out of twelve and we've been taught a valuable lesson. We have to take as many of our chances as possible to put a game to bed. It's something we've never really been that good at.

As the weeks go by, we'll think of this as a useful point gained rather than two dropped. Scunthorpe will be in the mix judging by the standard of football witnessed at The Valley, and they will be expecting the quick return to the Championship we had once dreamed of.

Let's hope we see some of the more positive football from now on that we are more than capable of and take a leaf out of the Franchise's book. I would like to see us sticking to having two up front till the death, no disrespect to the Ginger Pele, but late goals can win or change games for either side.

Here's to a hatful at Gigg Lane.