A Bank Holiday Down The Lane 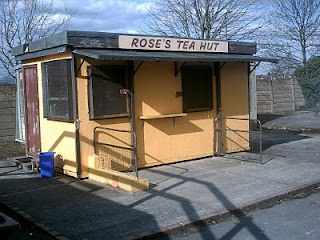 Bank holiday Monday's really should have full fixture lists. An opportunity for us all to dodge the shops and the DIY. It should be a large fry up followed by an early pre match pint once the rub-a-dub opens it's doors.

This August bank holiday saw a full non league programme but nothing higher than the Conference. So my day off gave me the chance to make a rare visit to Gander Green Lane, home to Sutton United, newly promoted to the Blue Square Bet South.

It seems a little odd going back as a middle aged man to a ground i did a lot of my growing up in. Little bits have changed, but on the whole it's like stepping back twenty years for me. I remember as a teenager throwing a proper sulk at home when finding out a game had been postponed. Blaming my parents and stropping around the house as if the decision was entirely theirs. It's not fair i used to scream. The ground may not have changed much but at least i have!
The sarcasm and sense of humour remains the same as well. Two decades ago i heard groups of old boys shout their witty comments in the direction of the pitch. Nowadays a new generation are doing the same, not word for word, but almost written by the same author.
If there is a fashion in humour it's missed this part of Greater London.

Obviously i don't recognise the players like i used but there is something special about calling players by their numbers. 'Come on eleven, my gran could have got to that ball'. You know the kind of comment, and of course, number eleven can hear every word you say.
I think of that scene in Fever Pitch when the two lads are stood behind a goal discussing a brother and his involvement in the game. Then the arm waving behind the goal, 'always wanted to do this' he says. Yep, me too.

So i arrive at the ground, park my bike in the car park and pay my eleven quid to gain entrance. I aim straight to the bar. Now to access the bar at Sutton you have to walk down the players tunnel, that in itself is quite something in my book.
Once in the bar it's a pint of Bombardier in a real glass, and under three pounds as well. Northern readers, i appreciate, won't understand that little moment of delight.
A drink with a 'twitter' friend Claire was enjoyable before moving outside to see the game and meet up with another friend from the social network, fellow Addick Jim McGinty.

Sutton's visitors were Dover Athletic who you may remember last season had a little bit of a cup run. They wore their away colours of sky blue. It was one of the worst kit designs I've seen for a fair few years and reminded me of a Coventry horror show from the eighties.
The football was very much what you'd expect, a standard most will never attain yet still lacking that final something.
It turned out a goalless draw yet don't let that fool you that it wasn't full of excitement. Sutton had many chances to snatch all three points, especially in the second half, whilst Dover looked capable of going up the other end and spoiling my day. A point each was a fair result and, all things considered, for Sutton not bad as Dover are tipped as play off contenders.

One of the beauties of non league football for me is standing on the terraces and discussing life, stopping occasionally to shout advice/abuse at the ref or any one of the twenty two running their hearts out.
Jim and myself discussed mortgages and ovens amongst other things during the ninety minutes. We also noticed how the 'Leroy' chant reminded us of the 'Leaburn' repetition from a few years back. It's much more than just a football match you know.
I've never left a non league match feeling hard done by. You don't tend to expect too much and are always surprised by the level of entertainment.
If you haven't seen grass roots football yet you've missed out. September 3rd, this Saturday , is non league day as there aren't any fixtures in the top two English divisions.
Look up your local side and see what it's all about.