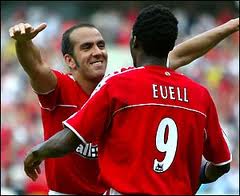 This has without doubt been a week in history we won't forget in a hurry. And not for the reason of Jason Euell re-signing for the club on a one year contract, becoming the club's sixteenth signing of the summer.
Neither will it be remembered for the Carling cup second round draw taking place. A draw that was seeded no less, defying all rhyme and reason so completely taking any romance out of an already stale tournament. Going into the hat with our name on the same ball as Reading meant we were a 'seeded' side and hence unable to be paired with any kind of glamour tie and a potential bumper pay day.
A few years back this would have worked to our possible advantage, making the prize of a Wembley day out slightly more obtainable.
Now we have the possible visit of Preston to get excited about. I've thought about trying to dress that up as best i can, but have ultimately given up through a real lack of ideas.


So whilst the Premier league gets under way today, we have our first away trip. Norwich City (remember them) are at Wigan, we are at Notts County. OK, Wigan isn't all that glamorous as top flight games go, but the debacle of 'that' Colchester match must be a very foggy memory. Oh how we all laughed and gloated......... 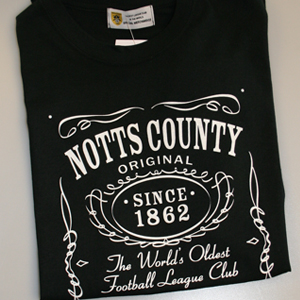 Last season we visited Meadow Lane in February and had the pleasure of playing in good old fashioned mud. Bradley Wright-Phillips missed a penalty and the chance to rescue a point after Neal Bishop had scored for the home side with his backside.
He is in the minority today of playing in that game, lining up now in our new look team. Chris Powell started with the same eleven as last Saturday against Bournemouth, sticking with Wagstaff over the eligible again Danny Green.
Green joined Jason Euell on the bench at the expense of Paul Benson and Bradley Pritchard.

The 800 travelling Addicks were in good voice and didn't have long to wait, Charlton started much the brighter of the two teams. In fact, Charlton looked far the better side for the whole first half playing good passing football. This culminated with two goals in the last ten minutes of the first period,
young Scott Wagstaff came up trumps first. After great work from Danny Hollands, Waggy took the ball around the keeper and netted from a very tight angle. Two in two from the homegrown talent reassured us all that there is no way he's giving his place up for anyone!
Then just before the break Chris Solly found Wright-Phillips with a delightful pass. The striker would have been forgiven for taking it on himself, but chose instead to play it to across the goal for Paul Hayes to get on the end of, notching his first goal for the Addicks.
By half time it really was just like watching Brazil, just as the south Londoners were singing.

In the second half we were 'treated' to the arrival of Lee Hughes for the home side. Again we started brightly and the skipper, Johnnie Jackson, nearly put us three up with his head, only for it to be cleared before crossing the line.
Notts County to their credit never really laid down and got back into the match on the hour mark. County substitute Montano got on the end of a corner and the ball snuck past the far post. After this the Magpies seemed very capable of snatching back a point, but our new Charlton are a lot more resilient. If anything, this was a good test for our midfield and defense. Last season we would have crumbled in a similar situation but this time around that nervousness has all but gone and a new found professionalism has come to the fore.

The Doc came on again to steady things up at the back for the final few minutes, whilst debuts came for Andy Hughes and Jason Euell. Euell of course to a rapturous ovation.
Danny Hollands and Paul Hayes both stood out as having very solid games although once again all eleven put a shift in and gave a good team performance.
This is Charlton's first win on the road in a very long time and for the second week running we can say we are top of the league. It sounds good.
One flash point happened after the final whistle. Hollands and Bishop were both booked after a bust up in front of the travelling support. It had been a good tempered match on the whole and this did seem to put a slight dampener on an otherwise great day. I'm sure in time we'll find out exactly the nature of these fisticuffs.

Norwich by the way got their first point on the board with a 1-1 draw at Wigan. A much better start to their life mixing it with the big boys than poor Queens Park Rangers........
Posted by algordon_cafc at 6:15 PM