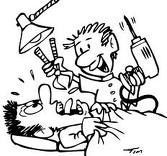 While everybody in SE7 is pondering the possible departure of Robbie Elliot to the North East, i had far more stressful things on my mind.

My beautiful wife went to the dentist last month and came home with 'wonderful' news. She delightfully told me that this house of horrors had gladly accepted me onto their books.
I was a child the last time i went to a dentist, I'm forty now, that's a lot of abuse the old Penelope's have been through.
Twenty odd years of smoking (gave up three years ago) and millions of cups of tea still show their effects with the appearance of a stain or two.
Getting a wallop in the face a few years back when a spanner slipped (snap-on not football thug) and hit me in the face means one of the lower gnashers wobbles a little.
The ton of metal from childhood fillings all seems to be present and correct whilst waiting to be added to. In fact i think their metal detectors were alerted as they tingled on arrival.

Now i really understand why I've been so snappy and irritable the past few days. Until i arrived at the surgery i hadn't fully comprehended the blind panic and sheer terror that would take over my body, freezing it to the spot and my losing any resemblance to speech.

GET ME OUT OF HERE BEFORE I LEAVE A PUDDLE ON THE FLOOR OF THE WAITING ROOM! shouted through my head, yet when i opened my mouth there was silence. At this point i realized there was no turning back, at least not without able bodied assistance.

This big Greek dentist steps into the corridor and calls my name. My first thought is his size, if we end up wrestling he's going to have me. I'd better go in quietly. Putting one leg in front of the other isn't so easy, Heidi comes in with me for moral support. She was of course under strict instruction NOT to hold my hand, i don't want this geezer thinking I'm any kind of wimp. 'Try not to show any kind of weakness' ringing through my head on loop.
Much to her amusement I'm laying rigid in the chair whilst making holes in the arm rests with my fingers as they dug deeper and deeper in. I fully expected automatic clamps to come out, gripping my wrists and thwarting my escape

X-rays first, something (it's sharp but I've no idea what) is pushed into my mouth for me to bite down on. How he got it through the smallest of openings I'll never know. This was followed by plenty of probing and the dictation of numbers taken down by the nurse. What they meant i'll never know.

As an outcome, i have to go back next week to see the hygienist to have them cleaned. Then, in six months time another check up. Turns out the gums aren't that great and i have a small case of gingivitis but otherwise not too bad. It appears people can ignore their Hampstead's for only a couple of years and be in a worse situation than yours truly. Lucky escape.

I'm not playing that game again, every six months now and I'm in there. I've pushed my luck once and got away with it. On the drive home i did consider how much I'd saved over the twenty years by not going, I lost count at around a grand.

Dentist's aren't the only people I've been avoiding.
There's this lump on the top of my head that I've been ignoring the past few years.............

Posted by algordon_cafc at 8:31 PM