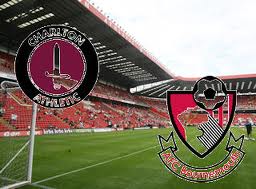 Football returned to SE7 today with a bang! For the first time in what seems like forever, Charlton played great football, dominated and then killed the match off with great professionalism.
That's what my heart yearns for now, love and pride.
After the problems of last nights awful dramas on the M25, the AFC Bournemouth side plus 1200 supporters made it to south east London. Only to wish they probably hadn't.

Chris Powell started with, on the whole, the eleven we expected. With Hamer injured, Elliot kept his place behind the sticks. In front of him were ex cherry Wiggins, Taylor, Morrison and Rigsby (Chris Solly). I did wonder if there may have been a little surprise of Simon Francis after his good pre season form. Fortunately the gaffer didn't do this to us.
Another former Bournemouth favourite, Danny Hollands, lined up in the middle alongside Dale Stephens. Captain Johnnie Jackson and Scott Wagstaff completed the midfield. Waggy starting as Danny Green was of course suspended, as was Powell who had to watch his team for the stands.
Paul Hayes and Wright-Phillips completed the side.
New boys Sullivan, Pritchard and Hughes were all on the bench alongside Paul Benson and the Doc.

Bournemouth fielded Danny Ings after the weeks rumours on twitter of the striker being another Valley bound cherry. Also in the starting line up was former Addick Harry Arter. After an hour Mark Moleley made an appearance for the opposition. L'Oreal models don't appear to work Saturday's then. Needless to say, Robbie Savage references were aplenty!

We've been used to the covered end booing and getting on the backs of the individuals of late. I'm pleased to announce that we appear to have turned a corner. I didn't hear one comment of abuse today. That has to be a first. Poor old Rhoys Wiggins however faced a constant stream of heckling with every touch from the visiting supporters, and i can confirm it was still going on all the way to London Bridge. We too were in good voice, song of the day had to be the covered end singing 'Charlton's feeder club' mockingly at the Jimmy Seed. Quality.

As for the game, well every single Addick put in a performance to be fair. It's lovely to see all eleven men put in a shift together whilst all being on the same wavelength.
Dale Stephens who had a fantastic full debut opened proceedings after some fine work by Solly. This was closely followed by a superb effort from Wiggins which was goal bound until it was turned around the post by their keeper. How he must have wished that had gone in, the best way to shut them up would have been a screamer like that.

The second half got off to an amazing start. The skippers corner was cleared into the path of Stephens who appeared to be in the middle of everything. The midfielder layed it off to Wagstaff who may well have already scored the goal of the season. Twenty yards out and he volleyed it into the top corner. We went wild.

Bradley Wright-Phillips was fouled in the box with a quarter of an hour to go and the ref pointed to the spot. Never in a month of Sunday's could you claim it was anything other than a clear cut penalty. Johnnie Jackson dispatched it in the manner we are accustomed to, putting the Addicks out of reach.
You could see clearly in his face what today meant to our captain as he celebrated in front of the north stand. This result was important for us faithful fans. It was a whole lot more to those footballers that had not been having the happiest of times recently at their place of work.

Benno got a run out when he came on for Hayes. Pritchard made his debut replacing Waggy a little later and got to experience playing in front of more than 300 people in a competitive match. Even the ginger Pele made a cameo coming on for BWP as we switched to 5-4-1 for stoppage time.

Dale Stephens stood out as a real quality signing, he looks assured alongside Hollands. As my good mate Dean said, Jackson doesn't look so special playing alongside these two which is without doubt a good thing!
Morrison looked a good prospect at the back. I'm not getting carried away as there is obviously a long way to go for him, but i do see signs of the Eddie Youds about him. And it's not just his haircut! He's a big lad who's not afraid to go in with all guns blazing. Yes, he'll get it wrong at times, but we need a hard man at the back. Michael could well fit the bill.

Solly did well both defensively and going forwards, whilst Wiggins did better than i expected, all things considered. This was a great team performance, something we didn't see at all last season. The opposition will improve and little cracks will appear, but for the moment let's enjoy a Saturday night like we haven't done for so long. I may even watch the football league show.....

Finally a quick note to say what a pleasure it was to meet Chicago Addick in the Rose of Denmark before the match. As the author of one of the best Charlton blogs, it was a real pleasure to put a face to the name.