A fiver buys more than a franchise 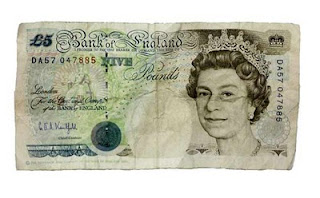 Saturday's football for a fiver campaign has to be seen as a success. Last season we drew the crowds in and the team failed to deliver. This time around however those long lost fans got quite a bit of entertainment for their green stuff.

How many of those 8000 or so returning (or new) faces come back again remains to be seen, but one things for sure, it's fantastic marketing by the club.
Club shop sales, food kiosk sales, extra revenue for the local pubs, cafes and take aways, it is a good old reminder of what things were like in SE7 just a handful of years ago. And at the current rate, what things will be like again soon.

On the pitch Charlton are doing as much to convince people to return as they are off it. Chesterfield are just the latest to stumble when confronted with Chrissy Powell's red and white army.

Once again work stopped me handing over my hard earned Lady Godiva and being a part of the 22,000 strong support. Nevertheless, the boys got through it without me. And while they were slogging away on the field of play, i was doing the same on my own personal battleground.

You see, tomorrow morning (and very very early morning at that) we head off down to Bath for a few days away.
So after work at about half two i serviced the car rather than listen to the match on CAFC player.
I knew in the long run this would give me a bartering pole.

As Paul Hayes opened the scoring with that glorious backheel, i was spinning the new oil filter on. When Johnnie Jackson made it two with a simple but precise strike from a free kick, i was filling the windscreen washer bottle and cleaning the lines.

So you ask me, why couldn't this wait until Sunday?
Well, I had the rare opportunity of an away game. I struggle to get out of work in time for home matches, unless we are drawn away to Crawley in the cup away days are a thing of the past for me. A day off and Charlton playing only an hour and a half down the road is far too good an opportunity to miss.

So when Chesterfield got a goal back i was choosing my moment. Then as Bradley Wright-Phillips sealed it in injury time, and i was putting up a curtain rail (complete with curtains) in the spare room, i struck with the venom of a particularly dangerous rabbit.

"I'm thinking of going to Milton Keynes on Tuesday my darling"

Not overly impressive but it did the trick and I'll jump on the bike later this afternoon to ride up there. Heidi has gone for a girlie shopping spree in Brighton in retaliation. Expensive this football lark.

I'm looking forward to my first trip to StadiumMK, I've heard as grounds go it's quite an experience. It's just the club we have trouble with.
In a week when Wrexham are set to join the likes of Exeter and AFC Wimbledon in a true football romance story, being owned by the supporters, the whole franchise affair still leaves a bitter taste in the mouth of all true football fans.
As does the name Clinton Morrison in the north and south of all Addicks. I'm sure we'll be seeing an appearance from this 'gentleman' tonight. I just hope it's not a repeat of the last time.

If you see me this evening (I'll be the one walking around with a crash helmet) come over and say hello. You will however have to wait for the next post containing my adventures tonight until after the weekend when i return from the west country.