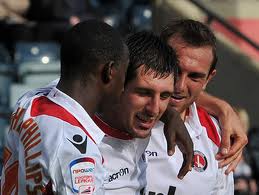 Away from The Valley Charlton continue to pick up points. I still believe the players do better without that 'pressure' of sending fourteen thousand fans home happy. Who knows how they'll cope with a twenty thousand plus attendance on Saturday?

Rochdale, with all due respect, are not going to be mounting much more than a relegation avoidance scheme this season. Having said that, grounds like Spotland are tricky places to go and take all the spoils (aren't they all?).
Charlton did take take all three points but made very hard work of it.

It was the Bournemouth old boys act that graced the score sheet. Danny Hollands constantly good performances were rewarded with his first goal for the club to put the visitors in the lead.
Rhoys Wiggins, who has been seen as a weak link in the side so far doubled the lead just before the interval.

Being Charlton we had our normal self inflicted scare. Every Addick knows nothing for our boys is simple and two Rochdale goals proved the point. Hollands however popped up with ten to go and sent the Londoners back down south with huge grins across their drunken (well my friends who went were) faces.

Four away wins in a row. I'll use the dreaded word, it is promotion form and that's why we are top of the table.
Just to sort out that home form.

Maybe, like i said, it's the pressure. Perhaps it's the great stadium and day out which causes the visitors to raise their game. One things for sure, we don't often look in total control at home.

Every manager will tell you this but you need to make your home a fortress. Yes, we are top of the table and shouldn't need to panic. Agreed, but from what I've seen in SE7, poor teams have failed to punish us and half decent sides have walked away with a point.
I remember many years ago hearing Ray Clemence in his Liverpool days saying "win all your home games and draw all your away ones and you'll be sure to win the league".
In the real world that won't happen but it's a safer target than winning the away games and drawing at home!

Saturday could be time to change all that. Chesterfield would, you'd think, be easy pickings. Look at their form though and they have won their last three. That includes a three nil away win and scoring four past Carlisle last Saturday.
I'm certain they'll relish playing in a lovely stadium like ours. And with Charlton's 'football for a fiver' campaign, it's guaranteed to be a bumper crowd. It'll be a great match for either side to win for sure. This should though be a home win in anybody's book.

There has been enough incident in football these past few days, what with Torres missing a sitter and the whole Arsenal/Wenger sideshow.  The Premier League is turning more into a circus every week, I'm happy to see League One stay predictable.
Well not too predictable, i don't want the Charlton mid season wobble of course...............

Come on you reds!!

Posted by algordon_cafc at 8:23 PM