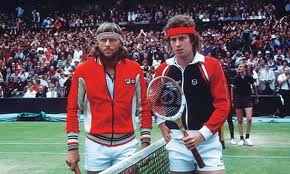 Bjorn Borg is one of the style icons of the seventies and early eighties, not to mention an Addick as well. The Swede who, in my eyes, put sportswear firm Fila on the map was always a hero of mine.

So when i saw my chance to have my very own piece of Borg Fila style, at less than half price, i jumped at it. The red and white track top our man is wearing in the picture above was the said article of clothing.
Size?, a division of JD sports, advertised it on their website. I did the necessary clicking of the mouse and this garment of desire was duly dispatched via the Home Delivery Network courier company. You may be more familiar with their more commercial  name, Yodel.
Obviously popular with the British public, check out this twitter account.

That was the last anyone ever saw of it.  The same day it left the Gatwick depot in a van, the bar code fell off (or so their story goes!) and the driver was unable to determine where to deliver it, so it returned to where it came from. As far as anyone can work out it still sits, unloved, at that same depot in a dark corner somewhere. You've probably realised like i did that without a bar code you cannot read the name and address, and therefore cannot possibly know where to take it.

Without an attempted delivery, i never received a 'sorry we missed you' card through the door. It was only a few days later i started to make some enquires. I'd bought from Size? before and things had turned up pretty much next day.
I could, apparently,  track my parcel and arrange re-delivery on line. No matter what i tried it remained firmly planted in the Gatwick depot.
I finally rang the courier firm and told them of my woe. It took a few attempts (at 10 pence a minute) of getting cut off at the promise of being put through to an advisor, before finally getting through to a real person. A search of the depot was promised, my number taken, i would hear something soon.
Or never. Not a dickie bird.

I then e-mailed Size? (who have been a pleasure to deal with i may add) and asked them to do the chasing as these phone calls were costing me a fortune. Plus i figured clients carried a little more clout than me.
Yesterday they told me Home Delivery Network could not locate my parcel and it was now classed as lost. No shit Sherlock.
I've been refunded the full amount as the item is out of stock and no replacement can therefore be sent. I didn't really want a refund though, i wanted to look like Bjorn Borg.

I've since heard I'm not by any means alone with my unfortunate luck with this company. Even the BBC Watchdog programme have touched on the subject. They are one of the main couriers for Amazon and therefore deal with many parcels YOU receive. Good luck.

The courier company couldn't deliver, could Charlton do better? Not in the Carling cup.
Preston North End came to The Valley to take on our impressive second string from the first round.
Last night however the reserves didn't look quite so fluent in their game and went out of the competition 2-0.
It is after all only a distraction from the league and i suspect all supporters would rather we saved our very best for that.
And without kicking a ball in the promotion hunt last night, we moved to the top of the pile.
Sheffield United dropped points at home to contenders Huddersfield, whilst Brentford conceded an injury time goal to Colchester. This all left the Addicks sat at the summit, with a game in hand over second and third. Not a bad outcome to an evening of cup disappointment. 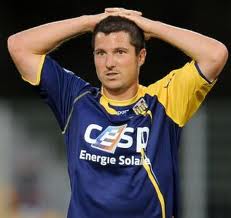 The final piece of news of the day was signing number nineteen (i think, i may possibly have lost count) of the season. Obviously very low on numbers in personnel, we have signed free agent Yann Kermorgant on a two year deal.
The French striker has had some experience in England lately with Leicester City, hence Powell's knowledge of the player. Looking at the statistics he's not going to lead any goal scoring charts but is a big lad and may well be seen as someone to hold the ball up and link with a natural finisher.

Posted by algordon_cafc at 1:47 PM