It's black and white. 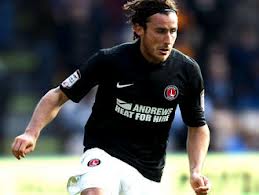 In a day and age when football sides have third kits, commemorative kits and even European kits, it's refreshing for me to see Charlton often run out with the wrong shorts on. My contempt for Nike aside, traditional red and white home attire complemented with an all black away number works. We have seen red shorts appear occasionally and now we have the home shorts breaking up the black. It all harks back to me of a day when football was a lot less commercial, when you made do with what you had and just for those of you watching in black and white, Charlton are in the lighter shorts.

Chris Powell surprised us with a formula at Leeds that brought home a point and should perhaps have reaped even more reward. There were no surprises that he named an unchanged side at Molineux.
The similarities didn't stop at the line up. Once again Charlton went behind and looked second best during the first half. And once again the Addicks pulled a goal back, having chances a plenty to come back to London with three more points on the board.

Lawrie Wilson started his account after Rob Hulse had been denied, the hard working striker running his heart out during the afternoon and having the greatest of opportunities at the death with a close range header which he unbelievably steered wide.

Two draws away from home in five days at Leeds and Wolves is undoubtedly a great achievement, but that hard work now depends on capitalizing with the home fixtures against Middlesbrough and Cardiff. Will Powell use this formation at The Valley or does he need to go for the throat and play two up front to utilize the home advantage?

Our home form has been very below par, not a patch on the gritty performances on our travels which is why we now languish at a lowly twentieth in the table. The away form is mid table, no-one can take that away but the home form is that of a relegation side. We can draw matches all day on the road but if we don't punish teams in SE7 we'll undo the good work achieved around the country. Three wins in the first thirteen games tells it's own story. Perfect timing for two of the top three to make their way into South East London next then, although on the plus side both these sides may have impeccable home form but can both be dissected and beaten on the road.

A long way to go of course, but if we can address the home form, that mid table security we desire will eventually follow.  November would be a lovely time to put a run together, i still deep down believe we'll go into Christmas in a far more salubrious position.

What better way to build on the week's hard work and start a run than dispatching Nicky Bailey and co! For the benefit of those reading in black and white........

Come on you darker shirts attacking the goal to your left!
Posted by algordon_cafc at 3:57 PM