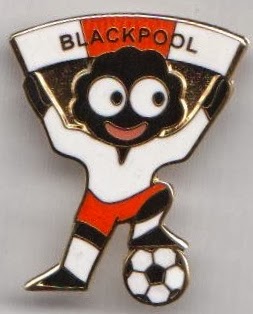 We've now played ten (recorded) league games and we've finally kept a clean sheet, even young children go ten whole nights in bed and have a better record. On a similar vein we've only scored once in the last four matches, six hours of football. Six hours of school disco's and the spottiest kid is again going to wallop that record and score more often.

We were uplifted, on a high, after Tuesday's spirited performance. We wanted more of the same please, perhaps one better and a victory. We had beaten this lot twice last season, why not again today? The trouble is, that the chemistry, the emanation radiated from a floodlit crowd doesn't travel well, it loses something come Saturday no matter how much we try to revive it.

Chris Powell, unsurprisingly, started with the same eleven in, again,  the same formation. Blackpool lined up with the game changing, the very confident on the ball, the gaffers son, Tom Ince and a certain former Charlton favourite Ricardo Fuller amongst their very large and physical side. There was no doubt our youngsters would be muscled out of many of the challenges during the course of the afternoon.

At this point I'd like to just remind you all of my love for a sash on a football shirt. Blackpool wore a white top with a tangerine sash front and back. It could have so easily been the best shirt I'd seen adorn The Valley pitch if it wasn't for that awful blue Wonga logo emblazoned across the front of it. Fair play to Errea though for producing such a fine effort. We, mean time, shall stick with our N**e templates.

Jordan Cousins had signed a three year deal on Friday (and how the club milked such breaking news), he looked very lively in his effort to repay the club for their generosity. He was orchestral in many of our early moves as we did start the game where we left off the last. The crowd played their part and tried to turn the place into a cauldron of noise, we were never going to be out-sung by the eight hundred Seasiders enjoying their trip to the capital.

Our build up play was good, Wiggins and Gower particularly shone for me, but we seemed to fall away in the final third of the pitch. Sordell and Church had very little idea of what the other was doing, Harriott just behind them was ineffectual and bullied out of the game. What worked on Tuesday fell down a little today.

Don't think I'm not happy with the point, despite a couple of shaky moments we did still play well and held our own without doubt. We could though have carried on playing until Sunday and still not looked like taking the win. Cousins came closest, a stunning drive of a shot which I thought had hit the base of the post but apparently was turned around by the keeper. It was certainly closer than any of our strikers came.

Simon Church ran all over the park yet again, nobody could dare question his commitment, but, as I tweeted earlier, only Steve Ovett has run further without finding the net. Goal shy (crap) he may be, but he's our goal shy (crap). Sordell on the other hand......

I'm all for giving the young lads a go, look at Harriott at the end of last season and Cousins at the beginning of this. Why not give Piggott a bigger role? Or better still recall young Michael Smith from AFC Wimbledon. He has an eye for goal, he's proved that everywhere he's been, the only recollection I have of him in a Charlton shirt is coming on as a late sub at Halifax in the FA Cup, and he made a goal then!  But then we've got Sordell, that pretentious Bolton player who, when taken off today as we waited to attack with a free kick and the clock ticking, ambled off ridiculously slowly hoping to milk some applause.

As the game progressed today Blackpool sensed we couldn't finish them off and continued to tease us with long throws and good balls into our box. We stuck firm though as the game fizzled out, once again we were left feeling happy for the point.

An international break follows, and it may serve us well as one or two more influential players possibly could have returned from injury by then. For me it's opportunity to catch another non league match following on from the success of 'non league day' last month.

Charlton, and football as a whole isn't the be all and end all as we so often forget. Today we were reminded of life's bigger and sometimes crueler picture. Paul Raisey, a well known face in the North Stand and the Rose of Denmark, plus being a very regular away day traveler, this week lost his beautiful daughter Charlotte. I had the pleasure of meeting this charming and delightful young lady for her 21st birthday a couple of years ago, she was a true shining light that embossed herself in both mine and Heidi's thoughts. I can only begin to imagine how Paul, Bill and the rest of the family must be feeling. My heart goes out to you all.

Posted by algordon_cafc at 9:45 PM