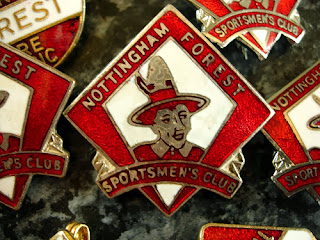 I met Jim, my companion for the evening, at The Harp in Charing Cross. A great boozer, albeit small in size, that serves some fine ales amidst it's very affable atmosphere. Jim, who had suffered the trip to Burnley on top of that harrowing display against Millwall, was all in favour of 'settling in' for the evening here as opposed to having to trek to South East London for yet another helping of despondency.

I was having none of this defeatist talk, reminding my good friend of the many great Charlton performances witnessed under the The Valley's floodlights. Yes, if we were to turn this slump around a night game was opportune time to do it. Reluctantly he agreed to accompany me, making it quite clear that this was solely on my head and I would be held accountable to all blame once the nightmare began. Deep down I knew going to the match was a good call.

Forest gave us the biggest footballing lesson of the season during the last campaign and look strong promotion contenders already at this early stage. There was no doubt we'd be up against it, it seemed a little unnecessary therefore for the referee to don a kit similar to Forest's away attire on top of this! As it was, we frequently wondered in the stands why this 'extra player' of theirs shied away from making a tackle.

Callum Harriott got a start playing just behind the front two, Church and Sordell, in a kind of 4-3-3, or more appropriately 4-3-1-2 formation. This should have given us a more attacking edge, indeed we needed that having been not only goal shy but 'attempts' shy in recent weeks. It did leave us very weak out wide though, Forest players finding acres of room in the widest parts of the midway line. At these moments there was a school playground scenario as three red shirts would all dart out together chasing down their man. It was a bold manoeuvre by Chris Powell, nobody could argue he wasn't trying to address our problems.

Jordan Cousins was rewarded for his recent efforts with a full home debut alongside Gower and Stephens, while Richard Wood partnered Morrison in the heart of defence. Lawrie Wilson continued to deputize for the still injured Solly who has Jackson, Cort and Kermorgant as treatment room buddies.

If a bright start against Burnley could be emulated, and perhaps even bettered, we could be in for a special night. Two minutes in and we were behind. Jim gave me that look and reminded me of the comfort we had left in Charing Cross; I started to sing.

We conceded a needless free kick in front of the East Stand, former pie eating champion Andy Reid (I tease out of sadness and selfishness, knowing what a talent we have long lost) stepped up and floated a ball goal-wards. The defence watched, the Forest front men watched, time stood still as Ben Hamer, rather than making a routine save, got his timing wrong and was made to look a little foolish, cue a tirade of anti Hamer tweets clogging up the CAFC hash-tag.

It made a change from disparaging tweets about the owners I suppose. As Jim quite rightly pointed out in regard to Hamer's little faux pas, this particular shortcoming had nothing to do with the board or any money matters, we just really are, in football terms, that embarrassing.

Who didn't expect Forest to then go on and steamroller us? We decided it better they get their goals quick, at three down we could legitimately venture back to the pub, yes it would be better for everyone if this happened sooner rather than later. Night games though, they do something to the crowd that Saturday afternoon's don't quite muster. We made a lot of noise, we kept singing and by Jove I believe the players were starting to respond.

There were still mistakes, Wilson struggled to distribute the ball, Sordell was absent and Church chased everything and got into dangerous positions whilst cleverly disguising any potential threat to appear almost harmless. We were matching them though, making a game of it and it only needed a spark, Dale Stephens came so close just before the break but that wasn't to be it. Our tails were up, a rousing half time team talk would surely tip the balance in our favour.

Four minutes into the second half and the goal came. Marvin Sordell, bugger would I have to eat my words? He was clinical, he's paid to be, and his goal celebration sliding on his knees reeked of pretension, yet the celebration from his team mates emitted nothing less than a desire to go on and claim this scalp. Forest were rattled now and we bombarded them for a good period, oohs and aahs rang around the ground as we came so agonizingly close to doubling our tally, but slowly Forest got themselves back into it.

It ended a draw, it felt like a victory. It was a Charlton performance, the floodlights had worked their spell on the crowd again which in turn had made an impact on the pitch. Positivity and all that, man.

I still have my reservations, Sordell and Church in particular, and I'd rather see Wilson playing further forward, but we saw more than than enough to warrant a couple of celebratory pints of Young's in The Grapes at London Bridge before heading home. All in all I'm very upbeat about doing it again on Saturday against Blackpool, last season don't forget we wanted to play them every week.