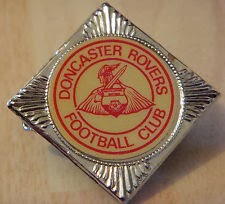 Bitter rivalries are usually formed through location, although occasionally a heated cup tie or some such event can sow the seeds of animosity. Has a football team ever been hated due to the weather though? Until this season it is unlikely, but biblical downpours and the ability to cope with such dampness have infuriated the supporters of Doncaster Rovers, so that now my Charlton pin badge is about as welcome in that part of South Yorkshire as an Ian Watkins guest appearance at your local school concert.

I'd have a lot more sympathy for the Rovers supporters if their team had turned up last night, although for some reason this fixture was seemingly cursed as a signal fire at London Bridge caused havoc with the transport infrastructure in and out of South East London; in hindsight it's quite fortunate anybody attended at all.

Heading north out of Redhill I was informed of the impending gloom thanks to the very apologetic train driver. My choices were to alight at East Croydon and return from where I had come or show some initiative and battle on with a new resourcefulness and complete my journey to SE7. I chose the latter.

A train to Victoria, the Victoria line to Green Park and then the Jubilee line to North Greenwich and, hey presto, I landed with my feathers none too ruffled. The bus stops here though were heaving with far too many people and I decided a half hour walk was by far the quickest way to complete the final leg, also giving me opportunity to visit the newly opened Pilot Inn for liquid refreshment. It proved a good call as the beer was delicious and I stumbled across a friend, also diverted from his usual route, which made the final walk far quicker and more sociable.

And so I reached The Valley in good time for kick off, quietly smiling to myself that I had defied logic and raced across a standstill rush hour London. Local authorities, police, the railway companies and just about everyone else must be praying one of these sides is relegated in May so we don't have a repeat performance next season.

I was feeling incredibly confident about the game, lightening not striking twice and all that. Doncaster were only going to score three at The Valley the once, we had shown great spirit at Loftus Road on Saturday and if we took that into this game a severe thrashing could be on the cards. Believe me, it's not often I feel quite so confident. Thankfully this was not misplaced.

Charlton were superb last night, their best performances at home always seem to come under the floodlights of an evening game. Even a pre match injury to Ben Hamer didn't detract from our superiority as Ben Alnwick came in for his league debut and did everything right. Yes Doncaster were poor, possibly the worst I've seen in SE7 for some time, but the rookie keeper pulled off a couple of fine stops and kept that all important clean sheet.

Simon Church up front was fantastic. His commitment is second to none, he missed chance after chance but was rewarded with a goal after an hour which he took round the keeper and slotted home very professionally. Quite how he later managed to stand on the ball then fall off it before landing face first in the dirt is quite a mystery though! I took a long time accepting the lad, strange as how Steve Jones is one of my all time favourite Addicks and he too ran all day after everything with very few goals in return. Church had the Donny centre backs worried from the off though and they looked in awe of him whenever he came close by. He's growing in my (highly influential) esteem week by week.

Dale Stephens is a true Jekyll and Hyde footballer, you never know which one is going to turn up, fortunately last night it was the talented player that can read the game, execute the decisive pass and score goals of sheer memorizing genius. Yesterday we were treated to the whole package, a goal that made Charlie Austin's screamer on Saturday look like a poacher's tap in. Helped with the youngsters Stewart and Cousins being both on song and a handful for the disorientated opposition, and Jackson putting in a true captain's shift, our midfield last night looked as good as any I'd seen in this division. Don't panic though, we still had time to throw in a few meaningless sideways passes to keep the purists happy.

Yann Kermorgant got his first full ninety minutes in for a while, and with it a superb chance to steal a goal. Somehow he managed to curl a distance effort in front of an open goal further towards the corner flag than the target. With two goals, two efforts off the woodwork and plenty of other near misses we were fortunate that we didn't depend on our talisman striker doing anymore than improving his match fitness.

So surely there can't be any gripes at all can there? Well, I'm still not convinced with Wilson at full back and there's always Marvin Sordell. He came on for twenty minutes in place of Church and immediately looked more knackered than the enthusiastic front man he replaced. Dragging his heels like he does can't be doing his boots any good at all. Other than that I was full of smiles and more than ready for an attempt to get home.

It must have been the first time I've left the ground and not seen an away fan. The couple of hundred Rovers fans that had made it surely came by coach, those that caught the train must have been fuming when they could get no further prior to kick off.

The trains were now running of sorts, I got to London Bridge as quickly as I would have normally and there was a connection to East Croydon within minutes. My luck stopped here. It took me another hour to reach Redhill and this is still six miles from home. Refusing to wait at least another half hour I resorted to a taxi which I shared with another chap still trying to get home after his days work. He asked me where I'd been; I told him all about Dale Stephens wonder goal.

Needless to say my smile was much larger than his.