No Running. No Diving. 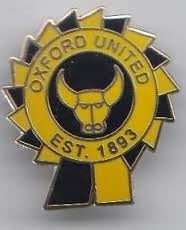 Tweet of the day was courtesy of Charlton Life, "Charlton have won the toss and will be attacking the Shallow End in the 1st half."
The twice postponed FA Cup clash against Oxford United had finally been given the go ahead, the pitch looked dreadful, the stadium was shut in many areas, and the visitors wore a purple shirt instead of a yellow one. Presumably to make them easier to spot by lifeguards should they get into difficulty and find themselves drowning.

It was Charlton however that found themselves out of their depth. New signings Astrit Ajdarević and Yohann Thuram-Ulien, a highly rated goalkeeper also signed on loan from Standard Liege, were both illegible to play as I believe the team had to be picked from those registered at the original date of the fixture. Chris Powell was nevertheless still determined to show his intentions in the competition by fielding a strong starting eleven.

The two new boys were nonetheless in attendance, part of the reported four and a half thousand cheering on the home side (870 made the trip from Oxford), but they were just getting used to their new surroundings, leaving their silicone swim hats and goggles back at their digs for another day.

Charlton were sinking without a trace on the field, a battling Oxford side taking a two goal advantage into the break, the team desperately trying to prove there's ridicule to be had from more than just our pitch alone. Chris Powell could do nothing about the playing surface, the performance however was another matter. He admitted the first half showing was the worst he'd witnessed in his three year tenure going on to say how he let the side know in no uncertain terms that he wasn't happy.

It did the trick, a much harder work rate coupled with a superb substitute performance from Danny Green saw the Addicks claw the two goals back and set up a third meeting of the season between the sides, probably next Tuesday, at the Kassam stadium. Another exhilarating cup trip to Huddersfield is still a possibility then.

AFC Bournemouth won their own third round replay last night against Burton Albion meaning that whatever the outcome of our own replay, the home fixture against the Cherries scheduled for January 25th has now been postponed.

As a footnote, it would appear that another new signing, Ms Katrien Meire, was in attendance last night. Recently appointed director at Charlton, I have it on good authority from a couple of friends that she is rather pleasing on the eye, well much more so than the first half performance at any rate!

And so we venture to Middlesbrough Saturday after a lengthy absence from league action and there's every possibility we could see a couple of new faces take the field. It's just typical that for the first time during this campaign Boro have found a bit of form...
Posted by algordon_cafc at 6:41 PM