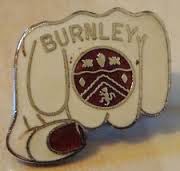 Not just a popular Burnley blog, not just a successful young thoroughbred, not even just words to one of the most famous drinking songs of all time. No, nay, never, here refers to a far off time when two unlikely events won't happen in South East London. First up it illuminates a time when one of our strikers may just find themselves on the score sheet, secondly, it's a bold proclamation underlining when Roland Duchâtelet can buy my support. We'll start with the first.

Burnley came to The Valley in second spot and looking very much contenders to win promotion automatically along with Leicester City. Having not lost in the league since Boxing Day, it was obvious to all that the team to finally end this unbeaten run was going to have to be a free-flowing and high goal scoring team. Not Charlton Athletic, not even on the back of our three clean sheets and a rare win. Goals haven't been an issue for the Clarets however, both Sam Vokes and Danny Ings taking the bull by the horns and proving to be the most exciting partnership in the league. Even with Ings out injured the task ahead of Charlton was daunting, yet bizarrely my journey up was filled with anticipation and hope. For all that, we had our Charlton back on Tuesday didn't we? The place was rocking last time I was there and we were due an upset.

The only thing rocking yesterday was the train on the final stage of the journey from Blackheath to Charlton. At London Bridge there wasn't a Burnley fan to be seen, surely this relatively small town club had brought a few down with them? Oh, had they! I'm led to believe that the club chairman (note - part of a board that are Burnley supporters first and foremost) had promised to buy each travelling supporter a pint if they came to one particular ale house in Blackheath. A huge gesture that seemed to be greatly accepted judging by the hoards that sang their way onto the train for one last stop. Suddenly I found myself wedged in the middle of about forty big lads, all of whom had consumed far more than the one pint bought for them. They were in fine voice, they used the roof of the carraige as a drum but were good natured, the language was inoffensive and they didn't scare any of the non football commuters. Good boys having a good time, a credit to the club.

The match itself deteriorated the further it went on. Simon Church had a great opportunity to give the home side the lead as he beat the last defender but a weak effort straight at the keeper was the best he could muster when he needed to deliver. Charlton played some fluid football in the middle of the pitch, Poyet again outstanding passing the ball around like an old pro. For all the posession though, something was obviously lacking, a threat on goal. It was second half substitute Astrit Ajdarević (why does our best player not start) who was the only red shirt to come close to scoring with a fine effort once the game was in effect already over.

Burnley scored their first in the 38th minute, a soft goal to concede and one which meant we went in at the interval slightly undeservingly behind. The goal would you believe was scored by Ashley Barnes as he got between two defenders to nod home the very impressive Junior Stanislas' cross. It was the former Brighton strikers first goal for the club, he was only in the starting eleven due to Ings injury. That's a strength in depth we can only dream of!

In all honesty Burnley were a very good team. Their ball control, their vision and their professionalism all shone through yesterday and they were deserved winners but a little luck certainly helped them on their way. The next goal came from the spot with the second half barely ten minutes old. Vokes was brought down by Dervite on the edge of the box. The striker certainly flew through the air with extenuated grace, the defender certainly caught the Burnley player. But nine out of ten officials would have given that as a free kick just the other side of the line. We got a lot of decisions going our way for ten minutes after that, I feel the referee knew he'd made the wrong call.

The penalty was expertly dispatched and with only one goal in the past five games to our name, the match as a competition had ended. There was a third goal right at the death but I'm afraid to say I was already walking up Floyd Road by this point in search of a beer to drown my sorrows in. It could have been more, Ben Hamer was in fine form considering we shipped three goals. Once again showing the owner why Chris Powell was so adamant that he played the bearded keeper. Before the game yesterday we had the seventh tightest defence in the division; sitting in twenty first place. It's obvious to one and all where the problem lays. So why would you want to start with a rookie goalkeeper? Why would you stick with the same non performing strikers? Why would you constantly ignore a young striker that you yourself brought into the club? Why would you replace the manager you sacked with someone who's gift to the game is his defensive tactual awareness and skill?

It was widely noted how Riga's name was sung on Tuesday night. Not by me it wasn't. I'm behind him simply because he's the manager of my football team but it's far too early in the relationship to want to invite the chap round to dinner. Yes, his body action at the end of the Bournemouth game was encouraging but so far, four games in, the only real difference I can see between the two managers is Riga's earlier use of the bench. I'm a long way from persuaded that he's the man to guide us to beat the drop, and I'm even less convinced he knows how to address the scoring problem.

I've been supporting Charlton for over thirty years. Over that time the club have made some dreadful decisions and got an awful lot of things wrong. But they've also got a lot of things right because they cared about me. And you. They respected and applauded your support, the club realised that we, the fans, were the club. Right now it feels like somebody has just come and bought that. Bought thirty years of my life and tossed it away without a thought. No amount of enticement with hospitality packages (keeping the potential revenue inside the club and away from local hostelries) , price structure reorganization offering me huge savings on my season ticket will soften this hurt. And Roland will have to do an awful lot more than offer to buy me a pint on an away day to win me over. The club was for sale, we weren't. Things were far from good under Slater and Jimenez but they were purely in it for the money and certainly didn't appear to want the club to tread water and just tick over. We won't be content to just be a feeder club for the flagship of the empire, a testing ground for European employees that need match fitness, a club that will settle for League One obscurity. We need to build on the Powell legacy and not just survive but grow into an established Championship football club, and we won't do that unless we start scoring goals. Over to you José Riga, make us all want to sing your name every week.

Posted by algordon_cafc at 5:54 PM