The King is dead. Long live the King! 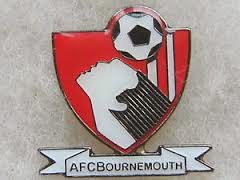 José Riga's red and white army sang the Covered End as the AFC Bournemouth players stood shell-shocked in the ninety something minute of a game they were always going to take at least a point from. It was, don't forget, the first goal they had conceded in a month.

With all the euphoria around me from scoring a sudden death winner, and it not coming from the suspected source, new recruit Jonathan Obika, I took a second to listen to the Charlton faithful. It was an odd sound. Chris Powell's song for sure but they'd only gone and changed the words. Too soon? Weren't we still all in mourning? A little like the girl who's reputation goes before her, three points and we're obviously anybody's.

I had boycotted both Huddersfield and Millwall, yes work had got in the way of both but I didn't lose any sleep over it. It wasn't that Powell wasn't there, I just struggled with the speed of the new "yes man's" arrival, the underhand tactics and the general unpleasant feeling about and around the club. I was all for erecting a picket line and shouting scab at you as you went through the turnstiles. But, I suppose curiosity got the better of me, and this new chap does wear a suit on match day so he can't be all that bad. Plus of course there was the added bonus of Yann Kermorgant returning to London, the chance to sing 'we all dream of a team of Kermorgant's' at old Roland. Mischief won the day; I boarded the train.

As matches go, it was very ordinary for over ninety minutes. Another goalless draw looked a certainty, especially when Danny Green hit the upright for us and their best opportunity was a foot too high. The second half saw a comedy of errors in the visitors box as the ball point blank refused to enter the net. A good Jackson free kick, albeit helped by Jordan Cousins's superb falling over distraction produced a corner that led to the Covered End Choir's hasty new remix. The ball floated in, Dorian Dervite rose above good friend Kermorgant, who's feet were firmly planted on the floor, and powerfully nodded the ball home. Our first goal in eight years. Or thereabouts. Conspiracy theorists have had a field day today about the French Connection!

We never did sing for a team of French strikers (in fact at the end we had three recognized front men on the pitch in Sodall, Obika and Church), but the former favourite did get the reception he deserved. As he warmed up in the north west corner he waved and a lump came to the throats of all. But, as hoards have tweeted of late, we move on.

Another good performance from Diego Poyet must have cemented his departure from the club this summer, but does highlight the fortunes of other youngsters. Before the pin up Uruguayan broke into the first team it was Cousins who took all the plaudits. Ever since I feel his performances have slipped somewhat. If it was down to me I'd rest him for a while in the hope it would revive some of the hunger in his game. And Callum Harriott; I'd rest him even longer. Along with Danny Green, our wide men looked very League One last night, when they departed for Obika first and then Sodall, we suddenly looked like we possibly knew where the box, if not the goal, was. Yes, you read right, our (Bolton's) Marvin actually noticeably improved our attacking options, words I thought I'd never utter. Perhaps under the new regime we have turned a corner after all.

This was a game in hand, never a more important three points have we earned this season. Out of the bottom three, five points out of nine and three clean sheets for Riga, optimism has made a welcomed return. Any doubt we may have harboured that the players would feel aggrieved and pine for Chris Powell was extinguished as we saw them rejoice at the end. I watched Riga hug them like he'd been their manager for three years rather than three matches. This silver haired fellow in the whistle has I believe caught the bug. I think there may just be a little bit of Charlton in him and that'll do for me!

Posted by algordon_cafc at 7:27 PM