Here one minute, gone the next. 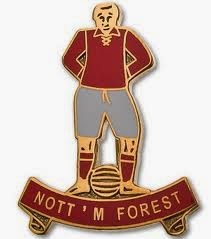 Marcus Tudgay today returned to Nottingham Forest a good month earlier than expected. Having struggled to make any impact during his short time with the Addicks, he only mustered a couple of substitute appearances and one start, that ill fated game at Bramall Lane earlier in the month.

It is reported that new head coach (manager) José Riga didn't fancy the player and had a multitude of blank firing front-men ahead of him in the pecking order. It's also possible of course that manager- less Forest may have recalled Tudgay ready for the incoming new boss to decide his team. They certainly need to sort something out quickly as after Billy Davies' last match in charge, the drubbing by fierce rivals Derby County, fortunes fared little better as they entertained Charlton on Tuesday evening.

The first of three consecutive journeys northbound, Charlton hoped for better results than last season's visit to the City Ground when they arguably received the sternest footballing lesson they were to get all season. Tuesday's affair was far more even, both sides creating chances and both sides squandering them. Our favourite nil-nil seemed on the cards once again when Obika hit the post and Jordan Cousins was unmarked and on hand to score with the rebound. Not as late as Dervite's winner the week before but another Tuesday night single goal victory. Not a bad habit to get into.

Again routine wasn't just a striker failing to find the net, but not for the first time we saw a mildly average night for the 'Duchâtelet six'. Only Astrit Ajdarević and Reza Ghoochannejhad featured yet neither could match the performance of Cousins, the youngster putting in a man of the match performance just when I felt the time could be right to rest him. I won't be giving up my day job.

With Tudgay going home, it is with no surprise that the revolving loan door keeps spinning. Rumours spread yesterday about the possible capture of Chris Eagles. He was supposedly seen at the Forest game although Derby are keen on the winger. Out of favour at Bolton could he be what the club needs to bring the best out of Wanderers teammate Marvin Sodall?

Whilst the former Manchester United player is still unsure of his immediate future, another current red devil has signed a short term loan deal at The Valley. Italian youngster Davide Petrucci joined up with his new teammates today for the first time. An attacking midfielder he's yet to feature for the first team at Old Trafford but has had a little experience in the Championship making four appearances for Peterborough last season. Since then, and more noticeably to our owner/management team, he's had a short spell on loan with Royal Antwerp in Belgium. They play in the big league where our current crop of hopefuls dream of ending up. I jest of course; I must learn to behave!

Whilst on the topic of loan switches, forgotten man Danny Hollands has gone to Portsmouth in League Two. Another Addick who will contest a relegation dogfight to the death.

Myself, I'm opting for a relegation battle elsewhere this evening. My local side Horley Town in the Combined Counties league have a floodlit kick off against mid table Cove at The New Defence. After a big win against fellow stragglers Chessington & Hook United on Tuesday evening, confidence is high amongst the squad that they can retain level nine status for next season. I'm guaranteed ninety minutes of passion and commitment although I'm not expecting to report on any Belgian connections tonight.

Posted by algordon_cafc at 5:20 PM