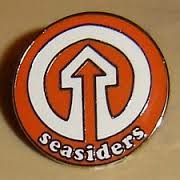 Books, films, video games (I'm reliably informed about the latter) can all sometimes finish with multiple or alternative endings. That can also be said of football. Yesterday as Charlton spent a stress free final end of season day out in Blackpool others around the country were playing out these jittery scenarios.

Birmingham City, Doncaster Rovers, Brighton and Reading all saw their fortunes change in the final seconds of the season but prior to this plenty of others knew their fate was still ninety minutes away from being definitive. Whether that be safety relegation or progression as we shall shortly see.

An early kick off in Blackpool meant I was still at work during the first half and on my scooter travelling to a non league game during the second. It was only once I'd parked up at Gander Green Lane that I discovered we had won on the final day with a Callum Harriott hat-trick. I would never had envisaged a result at Bloomfield Road had our own survival depended on it, hence the Watford match being so crucial, yet retrospectively that game and it's reward of safety gave us the excuse to enjoy the football and push on to an upbeat ending. For once the Charlton nails were spared.

The biggest issue of the season on the playing field, that of goalscoring, is what eventually gave us the ending we desired. For a team that rotated front men like a carousel, Riga finally hit the jackpot with moments to spare as Sordell found the form his reputation had promised whilst Harriott must have found Billy's Boots when rummaging in his grandparents loft. After two sensational goals on Tuesday he once again showed composure to convert all three yesterday with similar nonchalance.

None of us can be sure of what the summer holds, whether the much needed contracts will be offered, whether José Riga will still be in charge of the first team or the youths, or even at a different European post of the empire altogether. Who knows which players Roland Duchâtelet will entice to the club, will they be locally (empire) sourced or from pastures new? Will he send Simon Church off to Ujpest on loan seducing them with tales of his internationally acclaimed striker? We know we've got Championship football, we know we can't endure another campaign like we just have as the standard gets higher every season, and we know we have to put our trust in what is still very much the unknown.

All that aside, we had a much better end to the season than any of us could have envisaged. Players and supporters can take a well earned break, regroup and bounce back stronger. It's the same for Horley Town.

Their final game of the season was in Cobham against Mole Valley SCR. Survival in the Combined Counties Premier Division had been hanging by a thread, yet a final turn around in fortunes had seen them discover the same winning formula as Charlton. With three below them, 18th hosted 19th knowing that a draw would see both sides safe. A boring 0-0 may have been the order of the day in other parts of the world where an ungentlemanly agreement is commonplace before the kick off (I'm not pessimistic bout the forthcoming World Cup honest), but at level nine of the football pyramid it's very much 'kill or be killed'. As keen as I was to attend, it's true to say I had brought the club nothing but bad luck all season and chose to sit this one out. It was a great decision.

The club that finished below them, Ash United, can have no qualms about the integrity shown by both sides, they fought out an incredible 4-4 draw! Even the most imaginative of writers could never have stumbled across that particular outcome to wrap up the season, no matter how many alternative endings he gave you to choose from. I know first hand how many troubles Horley have had this season on the playing front and it's of great testament to Anthony Jupp and Chris Weller who jointly stepped up to the caretaker manager post for the second half of the season. So although it took to almost the final ball, Horley Town can enjoy their summer knowing they, like Charlton, have quietened the doubters and will fight at the same weight again come August. So will Sutton United.

It was Sutton United that I chose to watch yesterday. Having finished runners up in the Conference South, they entered the playoffs with Bromley, Ebbsfleet and Dover Athletic. Sutton had drawn the first leg at Dover 1-1 on Wednesday evening, they began yesterday's home leg hoping for the ending where their season was going to continue for yet another week.

Dressed in an entirely bright pink kit and with a large vocal travelling support, Dover couldn't have had a worse start. Three minutes in they were down to ten men after a cynical challenge on the edge of their penalty area saw their captain return to the dressing room. Dover were never going to be a walkover no matter how many players they had on the pitch but in the Spring sunshine that decision could have proved vital as tiredness crept in late on. Depending of course on what ending you were reading.

They could, and perhaps should, have been down to nine when their dread-locked midfielder Ricky Modeste slid in late taking an unfortunate Sutton full back almost into next week. It was an awful challenge, the player I felt more than lucky to remain on the pitch (the Sutton player certainly couldn't continue) yet it was still to prove to be a pivotal moment of the match. Modeste struck twice in twenty second half minutes to destroy any Sutton promotion hopes when many would argue he shouldn't have even been on the field. A third was added minutes later to compound Sutton's woes but in all honesty, whether the Dover number seven was on the pitch or not, Dover certainly deserved their victory as they defended superbly. It was a Mourinho masterclass from Kent. Sutton United froze on the day, it would be unfair to say it undid their hard work of the season as manager Paul Doswell has got the very best out of his squad this season, but ultimately it will be how many will remember it. Play off defeats are without doubt the hardest of ways to finish a season, this wasn't a parade that was merely rained on, it was washed out to sea.

So all three of my clubs will continue in August where they left off in May. If I'd been in Blackpool or Cobham yesterday I'd have jumped into the Summer break with a loud splash. As it was I was in Sutton feeling far more gloomy than the weather; yet all three clubs are in the same boat, albeit different ponds. But that's football isn't it, ultimately you can't choose the ending.