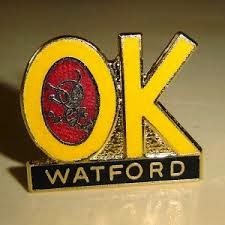 I presume our young midfielder was being a tad tongue-in-cheek when choosing a suitable twitter name for himself. Perhaps on the other hand his spelling really is atrocious, a careless 'I' where a 'Y' should sit (a consequence of too many Barcelona appearances on our televisions). He was don't forget a teenager still only two months ago, although I'm afraid I cannot quote his mother here as to the tidiness of his bedroom. If as I suspect it is merely a jest, a wishful comparison with one of the best footballers of a generation, young Callum certainly tried to live up to the name last night. The real Messi might just have give Harriott a pat on the back and an appreciative smile too.

This was a chance to seal our own survival, a game in hand and opportunity to mathematically savor Saturday's trip to Blackpool as little more than an enjoyable day out at the seaside. But it would take much more effort and much more concentration than they showed against Blackburn. Watford have already proved they are no walkovers and frustratingly they had nothing but pride to play for, no pressure and freedom to just enjoy their football. Lucky old them, back on planet Charlton my nerves were in tatters all day.

José Riga's starting eleven for the match saw a welcomed return for Lawrie Wilson playing in front of Solly whilst once again there wasn't a Duchâtelet signing included. If Riga was going to complete the job on the day he was going to do it with Powell's team. Cally Messi retained his place even after a shocker against Blackburn three days earlier. Now I'd have probably dropped him, as proud as I am of youth academy players starring in the first team I've been more than critical of Harriott (and others) of late. It's been said on numerous occasions before that my working knowledge of football team selection is atrocious and once again you've all been proved right. Harriott was tremendous last night working hard and scoring two goals his Argentinian namesake would have been proud of. For the first he collected the ball just outside the centre circle, had two defenders stand off him as he ran goal-wards and unleashed his shot from the edge of the area past the reach of the keeper to put the Addcks in front. His second and the teams third was a venomous volley on the end of a perfect Wilson cross. In between these skipper Johnnie Jackson had also found the net to regain Charlton's lead after Watford had equalized on the hour. A cross from another young starlet Morgan Fox found Jackson who looked more likely to fall over than score but he held his footing long enough to beat a defender and the keeper which resulted in another typical celebration where he looks like he may just explode.

It was a good night for goals, the solitary Watford score a stunning strike from the edge of the box after some delightful ball control, the final shot almost bursting the roof of the net. Unfortunately such skill was overshadowed by some of their other attributes. Watford were definitely a physically strong team but too often that advantage was used unlawfully as they started to get flustered. There was little surprise when the full back received his marching orders after a second booking although his protests and almost a refusal to leave the pitch will have done his case further harm. It certainly didn't seem to dampen the spirits of Watford's young 'ultras' who relentlessly sung for the whole ninety minutes and then all the way back to the centre of London on the train home. Full of enthusiasm, there must have been bin bags full of empty Red Bull tins left outside The Valley this morning for the dustmen.

The only other downside of the evening (excluding once again the obligatory substandard match officiating) was the activity in the East Stand during the first half. A reported heart attack, we plainly saw chest pumping, I can only echo everybody else and say my prayers are with the individual and his family right now as we wait for the club to announce an update in due course.

I've no doubt there was the usual last home game lap of honour, I didn't hang around as the idea of such a ceremony seemed almost hypocritical although I have seen the You Tube videos of both Riga and Jackson addressing the crowd. I was far to keen to celebrate in my own fashion, with a pint in my hand.

No matter what your thoughts on the Belgian ownership and all that it entails you cannot deny Riga has done his job well. He knew which games he could gain points in and which he couldn't during a far too hectic season run in. The Barnsley game was probably the only real hiccup in his plan and he certainly got the best out of a poor Championship squad. I'm just thrilled he did it in the main with Chris Powell's team although it again highlights the owners shortcomings; obviously different rules if one of your own disrespect an order.

Many of the team waved a Valley farewell last night, the squad will look entirely different come August for sure whether that be for the good or not but for once I'm not going to dwell on such gloomy scenarios. As I tweeted last night, Charlton had put me through nine months of pain and misery and then went and kissed me like I'd never been kissed before. I was jubilant to the point of ecstasy, it almost seemed like it was my Charlton again. I cheered, I sang, not in acceptance of any new regime but because my club had once again given me a reason, the players, the supporters (who certainly deserve credit for their performance).

Just for an evening I didn't want to give Roland a second thought, merely to toast a good victory and our Championship survival. And it felt refreshingly good!
Posted by algordon_cafc at 8:02 PM