Cards for all occasions 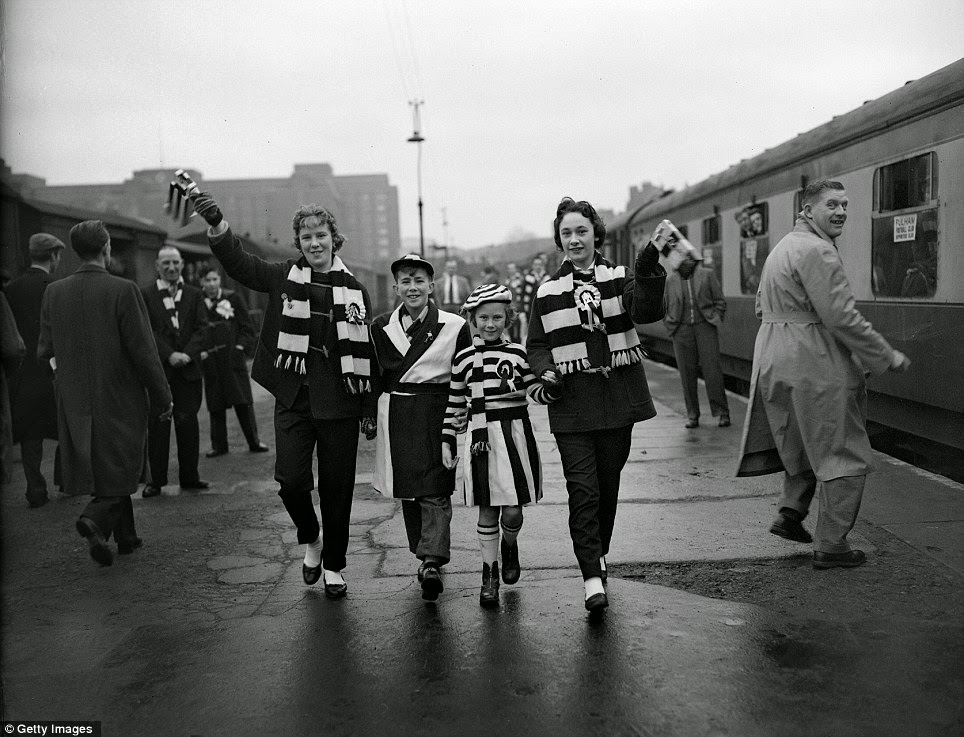 Happy football supporters making their way to the match. I've no doubt this picture was re-enacted countless times yesterday, just with replica shirts replacing the rosettes, except that is in my world. In my world everyone else is getting along just fine making good time and drinking pre match ale, unaware of the trials and trepidations the Good Lord has put my way.

A fortnight ago, whilst we were in Brighton, London Bridge was shut for the week for extensive engineering works and I stupidly never gave it another thought. Common sense should have told me more was to come, and if I'd researched it in advance I'd have spotted the glitch immediately. But I'm not like that, I'll buy a can of beer, amble to the station without giving delays or cancellations a second thought and until now that laid back attitude has served me well enough. So what's changed? No Southern trains to London Bridge on weekends, that's what. And ditto every weekend for the foreseeable future too.

I don't knock off work until one o'clock on a Saturday, and that's not voluntary overtime, it's part of my regular working week just like it was for your Grandparents and their parents before them; It's why we play on a Saturday afternoon in the first place. The trouble is, the first train leaves my little station in the sticks at nearly half one, and this does not give me time to run across London to arrive at London Bridge from the opposite direction. Yesterday my train pulled into Charlton at sixteen minutes past three, I missed not only the goal but Charlton's best football of the game!

I'm in desperate need of persuading my boss to let me knock off half an hour early on matchdays and making it up during the week. Feel free to petition him for me, otherwise I may not see the opening twenty minutes of another game this season unless I start going to Selhurst and that's not an option.

When I did arrive I saw a friend on the concourse hailing the wonderful football he'd just witnessed us play. Get yourself up there Al, it's breathtaking. Sitting in the back row of the Upper North and climbing every last stair in the house, it frequently is! We may well have started the better, received a deserved penalty (just as I was rolling into Deptford), which Buyens duly dispatched with distinction, but my aura of stress must have shifted itself to the pitch as Charlton seemed adamant to make the rest of the afternoon as difficult as possible for themselves.

Apart from the on pitch activities I also missed the David Whyte tenth minute tribute. Whyte, just a couple of months younger than myself, had always been a troubled man even when he graced The Valley pitch. Depression and a lifestyle that didn't conduce itself to longevity of life didn't stop the striker from making a name for himself in SE7 with some superb goals. I always remember a home game to Oldham Athletic near the start of the 96/97 season. The one and only time I ever sat in the Jimmy Seed stand. It was a drab 0-0 until Whyte struck near the end and ran in front of us to celebrate. I swear blind he (whilst hugging Ricky Otto) looked me straight in the eye and winked. At least that's what I'm telling my grandchildren.

Watford played exactly the game I expected, one of the best sides in the division their football could be superb if it wasn't spoilt by the needless carping and polluting. The moaning and fouling has more than just European undertones and has become synonymous with the Hertfordshire club. Fortunately we are a little behind them when it comes to fielding another clubs reserve side and hopefully can stop ourselves from following their lead. That said, a card happy referee did dish out four yellows apiece. It's arguable that a couple could have been straight reds, but the constant interruptions disrupted what should have certainly been a benchmark display from two sides that can play good attractive passing football.

Stephen Henderson had his best Charlton afternoon to date in goal, Bikey was a rock in front of him. Chris Solly looked more sprightly than of late (possibly therefore reducing him to the bench on Tuesday) but it tells it's own story that our star men were at the back. We sat far too deep too often and stood off the opposition in their build up play. Last season Ravel Morrison wore the wrong boots when he came to Charlton with QPR, Watford stupidly had shopped in the same store. Henderson produced a couple of fine saves, as did the woodwork but otherwise their fourteen shots were wasted.

It was gritty from Charlton, we were second best for large periods but hung it out. Franck Moussa had two great opportunities to possibly snatch a second on the break but froze with stage fright on both occasions. Last season we'd have collapsed in those circumstances but good Championship teams, the contenders, pick up three points when they perhaps shouldn't. We've certainly got a bad patch ahead of us at some point to come but we are contenders. Derby, Wigan, Watford, they'll all second that statement. Come Tuesday night we can hopefully add Wolves to that list.

A couple of pints in my first visit in a decade to The Royal Oak afterwards helped even out my blood and stress levels back to some kind of normality. Trains, football referees, it's all sent to try us and it's hard to remember Saturday afternoon isn't the be all and end all until you lose someone special.