Dancing for the draw specialists 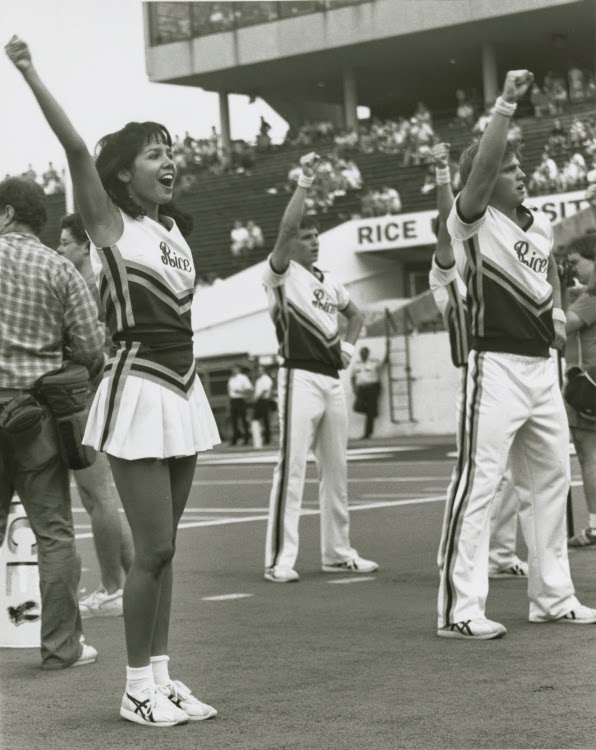 A dance troupe performing a half time routine is enough to put the fear in any football going angry young man, which is why perhaps those impotent folk in the small Croydon suburb of Selhurst seem to lap it up. In Charlton it's not the done thing is it?

There was uproar recently when the Greenwich Visitor published an article exclaiming university cheerleaders had been signed by Charlton, therefore by default degrading ourselves to the level of our South London rivals. But we thought no more of it as pom-poms, mini skirts and tumbling teenage girls failed to materialize on the hallowed turf of the Valley this season, in the same way that synchronized swimmers were absent from it the previous one.

Yesterday however the family stand were treated to the 'Sporty Spice impersonation society' giving their all by way of arm waving and high kicks. To be fair the kids lapped it up, both those performing and watching.

Now Charlton have traded on the 'family club' tag for a number of years (again, much to the disgust of the archetypal angry young man) so it should come as no surprise to any of us that such razzmatazz is thrust upon us. In fact the darkest recesses of my mind graphically recall a similar event(s) back in the glory days of the Premiership, although that may just be the stuff of dreams. Or an away day. I despise the idea of the fully fledged cheerleader waving a pom-pom into the face of Johnnie Jackson as he leads the team out of the tunnel, the full on palace route certainly isn't the path I'd want to see our club take, but as I get older (note, not maturer) I can understand the need to encourage and pamper to those enjoying a family day out.

The media seem to have taken it upon themselves once again to sensationalize the darker faction of the football crowd. Hooligan films have become a mainstay of the British film industry whilst midweek television documentaries have recently become fashionable and have discovered some obscure pond life that even Jeremy Kyle turned down as too inbred. It is a tiny issue that has never fully disappeared but the commercial television companies and press would love nothing more than to see it spread like wildfire, just to be able to stand back tut-tutting at the aftermath.

Thank the Lord the BBC were only too happy to try and shift the balance back into the light this week with their Marvellous documentary. The true story of Stoke City kit man and registered clown Neil Baldwin is one of the most inspiring and heart warming accounts you'll ever hear, and with one of my wife's uncles suffering with what you'd term 'learning difficulties' it touched very close to home too. There may not be many Nello's in this world but there are far more decent folk watching football than the papers will have you know.

A dance troupe certainly isn't the definitive answer but plenty of children (and grown-ups) found it far more interesting than the football that preceded it. And it's not aimed at, or even witnessed by, those angry young men that were hiding in the loo having their sneaky half time smoke. Or angry middle aged men like myself despairing with my head in my hands watching through my fingers.

I suppose I'd better mention the football while I can still remember it although it's clarity is fading fast. Another draw for Charlton, that's six from nine, not even West Bromwich Albion at their peak can boast such statistics. Middlesbrough had forced a definite result in their previous eight league outings but even they fell under our spell and matched us step for step in nonthreatening football for the majority of the match.

It took the boiling over of tempers to liven this game up. Firstly André Bikey-Amougou allegedly clattered an oncoming Boro front man whilst performing a back pass, I only saw the resulting floor roll from both players but the vocal travelling support certainly blamed our centre half whom they booed for the rest of the game. All I know is if Bikey clatters you you stay clattered. The Boro lad ran that off very quickly and we won the vocal battle with defiant cheers drowning out their booing with his every subsequent touch.

Immediately after this Adam Clayton took one of ours out down the other end with an arguably worse challenge, the fuse was certainly lit and the referee cowered like a dog on fireworks night. Albert Adomah, already booked, mimicked the high kicking of the half time dance troupe with Rhoys Wiggins as a target. Our full back plummeted to the floor and the man in the middle pointed for a Boro free kick. Even the laid back ball boy in front of the East stand found this remarkable enough to evacuate his nonchalant slumber. It was a moment of confusion, Adomah received his second yellow and was walking, we still thought the free kick was going their way. Utter chaos.

Obviously we got the correct decision in the end and a couple of great chances with it. Bulot hit the post in the same spot Watford had a fortnight earlier, both occasions hitting that single blemish on the smooth upright that causes the ball to defy the laws of physics and rebound out at an unnatural angle.

George Tucudean tried for an ambitious overhead kick with his back to the corner flag, again trying to make the most of the bizarre forces at work in the northern goalmouth before both Wilson and Wiggins both had great shots blocked, the latter off the line by an heroic defender. On any other day.

One young man at the final whistle decided to make a trophy out of a corner flag still smelling of a dozen teenage girls perfume as he plucked it out of the ground and made it all the way to the Jimmy Seed stand before the stewards mounted an attack. You see what effect dancing girls have on hot blooded young lads fast reaching puberty!

Another draw but still undefeated. Could we make it to October with that record intact? It's unlikely, we travel to top of the table Norwich on Tuesday and those Canaries are currently singly far louder than a whole host of Sporty Spices could ever dream of.