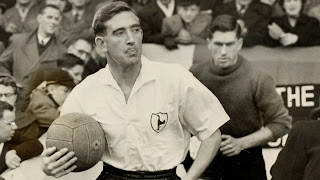 Bank holiday Monday, the good lady wife has gone to work and I'm home alone. Normally this would scream 'non-league' at me but it's all over. It's less than forty-eight hours since I was last in a football stadium and I'm already scratching at the walls.

A week ago I watched Horley Town finish their Combined Counties League campaign with defeat to Farnham Town, this weekend it was Charlton bringing their season to a close with defeat to Bournemouth. Two sides, both pleased to end with mid table obscurity, no play-off drama or last day nerves for me but that's no bad thing.

It was clear why Bournemouth won the title from what we witnessed on Saturday. They passed the ball quickly and accurately, they were confident on the ball and happy to take players on. They always looked to play the ball forwards and every one of them knew where the goal was. If you've a Charlton checklist, how many boxes have you just ticked? If you stayed behind to watch the south coast club enjoy their moment dreaming that it may be us next season I'm afraid you're living in the land of fairy tales, teams full of network journeymen do not have either the coherence or the aspiration required to be the best. When Yoni Buyens shrugged his shoulders after gifting the Cherries their second goal he sealed his fate in my eyes. I don't want to see him stay another season, he can get on the first flight back to Belgium as far as I'm concerned, no matter how well he can take a penalty kick.

It would be easy to say that Bournemouth bought their way to the title with another wealthy Russian at the reins, but I've seen the cost of that squad and it's by no means big money. Obviously I've no idea what the wage bill looks like, but lets not forget we were played off the park by a team with three ex-addicks in it, two of them rejects. All three of those would have been in with a fair shout of scooping our player of the year award if they'd performed like that in a Charlton shirt.

Last night saw this prestigious finale of the season and it tells it's own story in so many ways. The top three were never really in doubt but for all the winner Jordan Cousins has achieved, he struggled for large parts of the campaign because he was played out of position. The runner up, Gudmundsson has looked superb from time to time but has a tendency to drift in and out of games, while Henderson in third place missed a quarter of the season through injury.

It may sound like I'm about to throw the towel in but it's far easier to vent spleen than humbly praise. For a long time I honestly thought we'd be playing League One football next season, the effort when needed was monumental and a twelfth place finish under the circumstances is a good achievement. It's probably a true reflection of where we are as a football club and where Roland is happy for us to sit. A good shop window for his multitude of troops without having to pay league winning exorbitant wages. There I go again.

Good luck to Arter, Francis and Kermorgant though, I really hope they get a chance to shine in the top flight and aren't replaced in the Summer, and good luck to Eddie Howe. The small blip at Burnley aside, he certainly knows how to get the best out of his squad of footballers. It must be nice to have 'one of your own' at the helm. Stop it.

So Saturday's now will take a dull twist as I'll no doubt be dragged around garden centres and the like while doing my very best Kevin and Perry audition. No more football pubs, no more football characters. I never did want to stay at a party I didn't belong in, instead with ten minutes to play I ventured to the first of a few Saturday evening watering holes. I ended up at a Morris Dancer convention in Charing Cross but did meet one old lad who, although loving his football, couldn't have been further detached from me in just about every other facet of life.

In his eighties, he's a Spurs fan and only goes a handful of times a season nowadays. When he does however, it's always in a box with the full hospitality package; he told me he has a real love of the occasional glass of bubbly. A self made business man, he wore a whistle made from a delightfully expensive cloth, yet while he did reek of money he was more than happy to spend four quid of it on a pint for me. As we drank he told me of his friendship with the late Danny Blanchflower and how they first met in the RAF. Great tales you only ever seem to here on a match day, it's exactly that that I'm missing already.